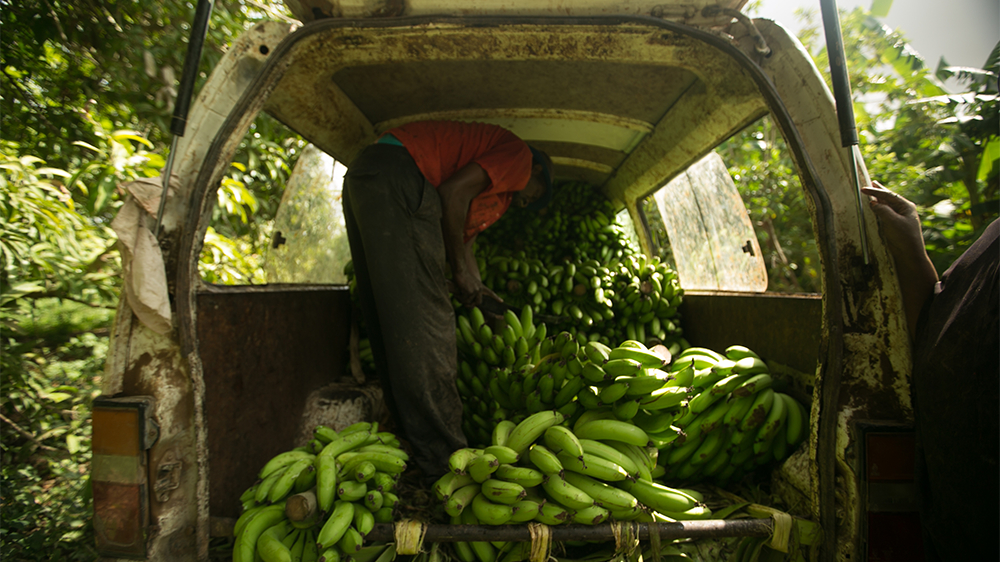 Afgoye, Somalia – Early morning showers fade into the distance as thick rain clouds give way to the piercing rays of a tropical sun, revealing wet, dark brown fertile soil. About 30 people emerge from the shades of full grown mango trees, woven baskets made of dried banana leaves in one hand and a sharp Panga – a machete – in the other.

They are farmers attending to a large banana plantation in Somalia’s farming capital of Afgoye, a riverside town some 30km south of the country’s seaside capital Mogadishu.

Holding a measuring ruler in his hand, Ahmedey Abduqadir leads the group of mainly female farmers through the muddy canals that snake through the plantation, to the far end of the farm where the fruit of the right size and shape are to be harvested.

He takes his time placing the ruler on selected fruit in the bunch of low hanging bananas, checking that they are of the right size before chopping them off and placing them in the baskets to be transported to a waiting vehicle.

The mood is upbeat and banter flows back and forth as they negotiate their way through the endless canals with banana loaded baskets on their backs.

“I cut bananas for one to three vehicles every morning and we send them to the city. We are very busy,” Ahmedey Abduqadir told Al Jazeera, his feet covered ankle deep in the mud. He has been a farmer for more than twenty years.

“Things are much better than before. Before because of the conflict there were not many jobs here but now many of us work almost every day,” Abduqadir added, as his colleagues cheered in the background.

Demand for the fruit has never been higher in the last two decades. Abduqadir, along with more than hundred other people, has found employment on this farm where they all work six days a week supplying Mogadishu’s dining tables.

Before the country’s bloody civil war, which toppled the central government in 1991, Somalia’s banana industry was the continent’s biggest. But it was destroyed because the warring sides not only looted the enterprises that processed and exported the fruit, but made farming on the banks of River Shabelle and Juba – Somalia’s two main rivers – too risky.

RELATED: The lost boys of Mogadishu

Farmers abandoned their tools and left for refugees camps in neighbouring countries in droves.

Some still remain abroad, while others barely scrape a living in the overcrowded camps for the Internally Displaced Persons (IDPs) that dot the main cities of this Horn of Africa country.

But as relative stability returns to the country, farmers have been venturing back to their farms in large numbers.

A sense of normalcy

It is no longer the frightening sounds of AK 47 assault rifles that greet the ears of visitors in this agricultural town, but the shouts of farmers chasing birds from their crops.

Farms that were long abandoned to be overtaken by weeds and wild trees because of the fighting, are being reclaimed and cultivated.Hundreds of locals who had been jobless for years have found a way of making a living.

“This place was a bush a year-and-half ago. We cleared the bush and now more than hundred people work here every day,” Omar Osman, the farm manager, told Al Jazeera.

Unlike many other regions in the country that depend on East Africa’s unpredictable rainy seasons, Afgoye is lush throughout the year thanks to the River Shabelle which flows through the town.

For the past two decades, the farmers had been awaiting a sense of normality to return in order to pick up their tools once again.

“Things are calm. Thank God. Us, Somalis, we have to make use of God’s blessings. This country has everything and now it is possible to make use of the land,” said the soft-spoken Osman.

Banana, mango, papaya and maize farms spread across the river bank as far as the eye can see.

Osman and fellow farmers are not just supplying the growing local demand but have started exporting to markets that were almost exclusively Somalia’s before the war.

“We have started exporting our bananas to Dubai and the rest of the UAE. We send at least one ship every month. We hope to increase that,” Osman said.

But not everyone is happy with this revival and increased supply of bananas flooding the markets. Traders who often buy the fruits from farmers in bulk have found their profits squeezed.

“When we buy it [bananas] from the farmer they sell it to us expensive because they count the weight and not the number of bananas and we sell it cheap to customers because of competition and large supply,” Ali Aaarow, a trader in Medina market in the capital told Al Jazeera.

But that’s not the only challenge traders are facing. Lack of proper storage facilities to help keep the fruit fresh for a longer period is also an issue.

“We don’t have a fridge where to keep the bananas. We have to sell them quick or we make more losses,” Aarow said inspecting a new delivery of fresh bananas from Afgoye.

The farmers, however, praying the good times continue.

“God willing, Somali bananas will be on the dining tables everywhere in the world,” said Osman, the farm manager.