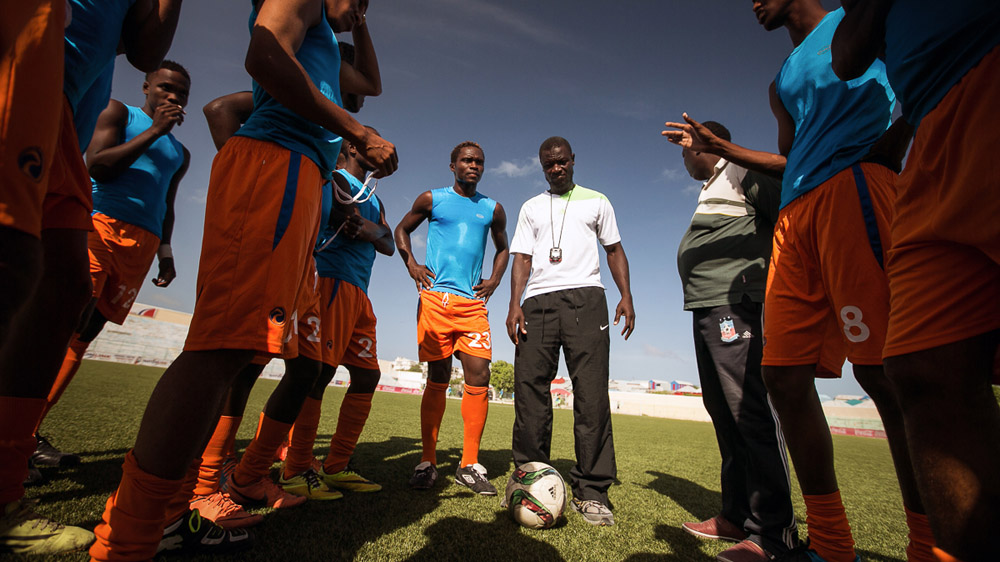 Mogadishu, Somalia – Mustapha Izekor left his home in Nigeria’s Kano State to pursue his childhood dream of playing football in a professional league. This dream of playing in a big stadium in front of thousands of cheering fans brought him to the opposite side of the continent to Somalia, at the Horn of Africa.

More than a year ago, while seeking the opportunity to play in one of the continent’s top football leagues, Izekor was approached by a football scout representing Benadir Sports Club which is based in the Somali capital, Mogadishu.

After an initial trial period Izekor joined Benadir, one of the most popular teams in Somalia, and he has not looked back.

“For me football is my life. I have had passion for it since I was a kid. So, wherever football takes me I’m happy with it,” Izekor told Al Jazeera after his last training session with the team before the summer holiday break.

Football, the most popular sport in this country of an estimated 10 million people, is making a slow but visible and colourful come back.

Stadiums that had long been abandoned to warring armed groups, have been reclaimed. Fresh bright paint, new green artificial grass pitches and newly rebuilt stands greet fans in the newly refurbished stadiums in Mogadishu. Local businesses in this seaside city are now competing to be the main sponsors of the league.

Once, the many FM radio stations filled the city’s airwaves with broadcasts of the latest scores. But, the affordable $0.50 per game price has allowed fans to flock to football pitches in the hope of catching an up close glimpse of the latest foreign players and local heroes.

Mbalangu Hussein stood a few metres away from where Izekor barked orders at a confused-looking group of players standing in a circle. Hussein was hired from Uganda two months ago to lead Benadir’s charge to the top of the league.

The 38-year-old father of three, said he has been pleasantly surprised by the willingness of everyone he had met so far to improve the standard of the game in Somalia.

“The players’ level of fitness is really good. The players in Somalia are very quick and mobile. They have huge potential,” Hussein said.

“A bit of improvement on the tactical side and they could challenge any team in Africa,” Hussein said, keeping an eye on the training players.

Officials feeling safer and energised after more than two decades of civil war are busy trying to shed the country’s ugly history of conflict, bombs and bullets.

Hassan Mohamed, Somalia’s Football Federation Secretary proudly pointed to the thousands of fans who turned out to watch a local match between Benadir and Heegan football clubs.

“There are thousands here today watching this game,” he told Al Jazeera in a reassuring manner. “This is proof that life here is returning to normal.”

“This would not have been possible a few years ago. It shows how far we have come along. We are back,” Mohamed said.

There are at least 20 foreign players that have joined the league in the past year.

Aside from the fact that Mogadishu offers a pleasant tropical climate, the players say they came to Somalia because the Somali league offered them better opportunities than the leagues in their own countries.

In addition, because the have more experience, they are the best paid in the league, and in some cases take home three times more pay than the local players.

“We pay them well. We also provide them with housing, food and flight tickets when the season ends and they return home to their countries,” Abukar Mohamed, director of Benadir Sports Club told Al Jazeera.

Apart from their Ugandan team manager, Benadir has four additional foreign players on their roster.

Fearing that local teams were trying to buy their way into winning titles at the expense of local talent, the football association stepped in to stop teams fielding all foreign players.

“Every team is allowed to register only four foreign players,” Mohamed said. “This is to protect the local talent. We can’t have a league made up of only foreign players.”

For the foreign footballers, playing in Somalia comes with some unique challenges.

Differences in language becomes an issue during training – most of the team speaks Somali but the foreign players speak English. Gestures and signs become an important mode of communication for the team.

However, the fragile security situation is an even more challenging obstacle for the foreign players.

The country is slowly turning a corner, but explosions and targeted assassinations still occur. Armed guards keep watch over the players as they go about their training session and travel around the city.

Yet, the players are determined to remain in Somalia.

“I’m only interested in football. Life is good here and I will tell any young footballer to come and experience football here,” Izekor, the Nigerian, told Al Jazeera.