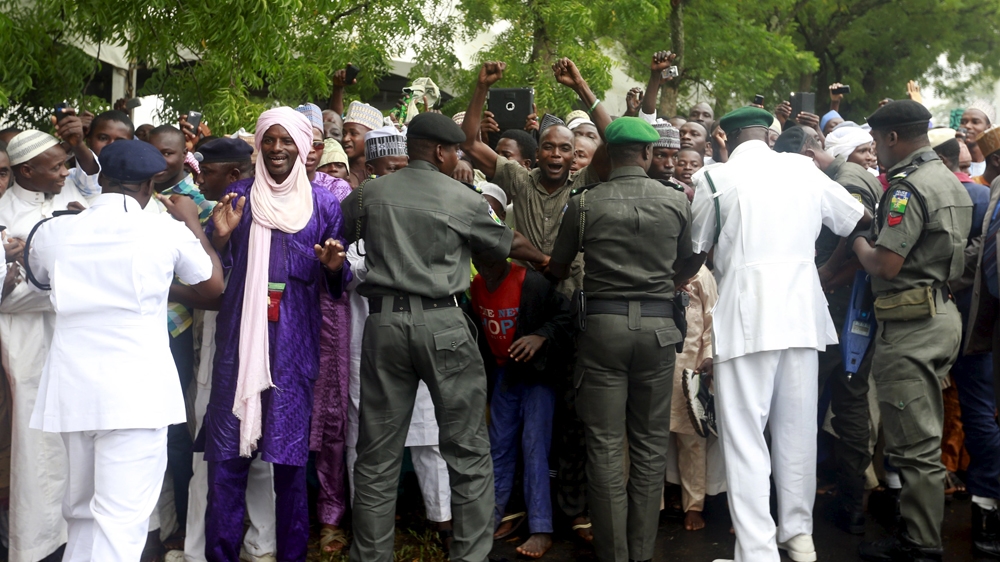 Two suicide bombers, an elderly woman and a 10-year-old girl, have killed at least 12 people in the northeastern Nigerian city of Damaturu as worshippers gathered to mark the Muslim Eid al-Fitr holiday, a military spokesman has said.

The pair detonated their bombs at around 06:40 GMT on Friday as worshippers queued for security screening to enter an open-air praying area in Layin Gwange, Damaturu, Colonel Sani Usman told the Reuters news agency.

“Four persons died in the first explosion and seven people were injured. While in the second explosion, five people lost their lives and 11 people were wounded,” he said.

In a separate attack in northern Nigeria, a male suicide bomber also reportedly detonated himself while riding in a motorised carriage, Al Jazeera’s Yvonne Ndege reported from the capital Abuja.

It was unclear in which town the attack took place, and there were no additional details about casualties.

There was no immediate claim of responsibility for any of the attacks but such incidents are often blamed on the armed group Boko Haram.

On Thursday, about 50 people were killed in bomb attacks at a market in Gombe, about 200km from Damaturu.

Boko Haram has killed thousands of people and left about 1.5 million others displaced during a six-year armed conflict in which it has tried to set up a state adhering to strict Islamic law in the northeast of Africa’s most populous country.

President Muhammadu Buhari has made defeating the armed group his top priority.

However, since he was inaugurated on May 29, hundreds of people have been killed in bombings and attacks.

Buhari replaced his defence chiefs on Monday as part of an attempt to step up the campaign against the group.

The violence is likely to be high on the agenda when he meets US President Barack Obama for talks in Washington on Monday.

Boko Haram controlled territory about the size of Belgium at the end of 2014.

Nigeria has managed to push them out of most of that area with the help of troops from neighbouring Chad, Niger and Cameroon.

However, the armed group has dispersed, and in recent weeks has carried out a string of attacks on targets in northern Nigeria and the countries with which it shares borders.

In Niger, security sources reported that its military force had killed at least 30 suspected Boko Haram fighters, as it searched villages just over the border with Nigeria.

The Reuters news agency reported that the army launched the operation on Thursday, a day after gunmen thought to be from Boko Haram crossed over from Nigeria and killed at least a dozen villagers on the Niger side of the border.

“Our defence forces who are engaged in the operation inside Nigeria between the towns of Malam Fatori and Damasak, killed the insurgents on Thursday,” a security source said, requesting not to be named.

Boko Haram has started calling itself the Islamic State of Iraq and the Levant’s (ISIL) “West Africa Province,” since pledging allegiance in March to the armed group, which controls large areas of Syria and Iraq.

Boko Haram has targeted security forces, schools and other Muslim communities who do not share its version of Islam.