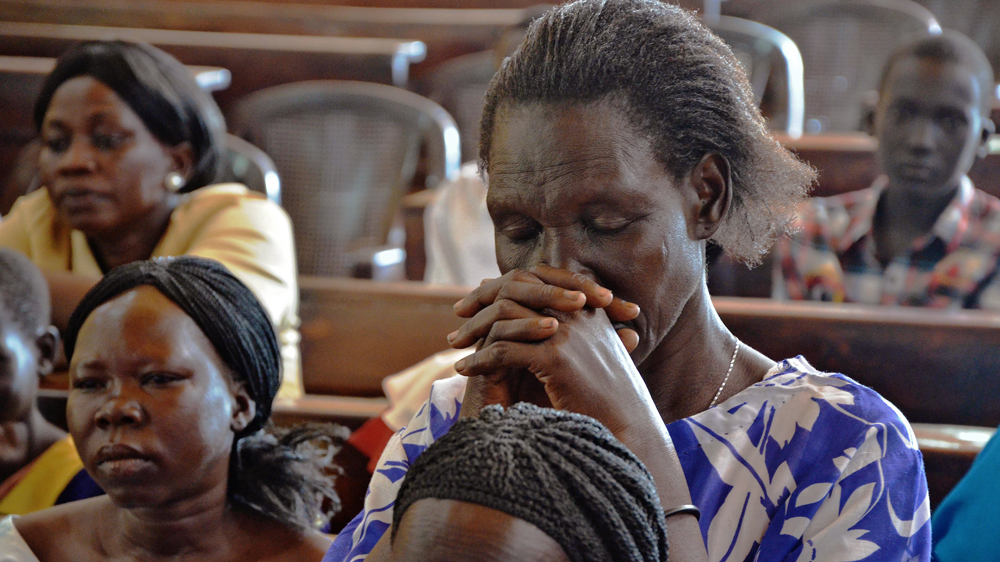 London, United Kingdom – Despite the bloody conflict that has engulfed his country for much of his life, Bishop Emeritus Paride Taban exudes an air of calm – which, he said, comes from the simplicity of his life in rural South Sudan.

“If you go to my bank account I have nothing,” Taban said in July during a trip to London, to promote peace-building efforts in his war-torn country.

“At home, I eat traditional food given to me by my relatives – millet and green vegetables. I don’t eat meat. My mother told me not to eat stolen food – and I don’t know whether this cow was stolen or not,” told Taban.

Cattle raiding has been a feature of life in South Sudan, the world’s youngest country and one of its poorest, long before it became independent in July 2011. But in the past 18 months, the country has faced more devastating problems.

In December 2013, a political dispute between President Salva Kiir and former Vice President Riek Machar sparked a conflict that has claimed the lives of tens of thousands of people and displaced two million others.

More than 4.6 million people face severe food insecurity and a quarter of a million children are severely malnourished, according to the latest UN humanitarian report, published on July 15.

The conflict that was sparked by political rivalry quickly escalated into one with tribal dimensions. A key component is the tribal affiliation of the leaders. Kiir is from the largest tribe in the country, the Dinka, while Machar is from the second largest tribal constituency, the Nuer.

But, the situation is more complex. The fighting has not been neatly divided along ethnic lines. Other groups of fighters have followed local commanders pursuing their own self-interest or regional loyalties.

An ongoing cycle of tribal vengeance killings was started by the murder of hundreds of Nuer by government-aligned soldiers in December 2013.

Taban, now 79 years old, has long been a key figure in promoting reconciliation in South Sudan.

In 1999, he set up a farm in a village called Kuron in a diocese in the southeastern part of the country, where he was the Catholic bishop from 1983 to 2004.

The idea was to demonstrate how communities blighted by years of conflict could move on from a destructive cycle of cattle raiding. They were trained to improve farming methods and cultivate new crops to show them a new way of life.

In 2004, Taban renamed Kuron the Holy Trinity Peace Village, a model settlement promoting peace and development across the country.

“They now have agricultural farming. They have maize, which they never knew. They have bananas and they had never seen a banana,” explained Taban.

“They were naked, and now they are dressing in clothes. They feel very grateful. They feel like human beings,” Taban said.

In 2013, Taban’s work in Kuron earned him the United Nations Sergio Vieira de Mello Prize, an award granted every year to draw attention to efforts made by an individual, group or an organisation to do something “special and unique” to reconcile people and parties in conflict.

Peace in the grassroots

But for Taban, the church, and the wider community of South Sudan, the current challenge is of a much greater scale.

The violence that erupted in December 2013 has proved impervious to repeated peace efforts mediated by the Intergovernmental Authority on Development (IGAD), a trading block of eight East African countries.

High-level talks alone cannot bring peace to South Sudan, claimed Taban: “To be sustainable you can’t make peace only between the political people. You have to go to the grassroots. We need healing to happen at all levels.”

Grassroots peace and reconciliation efforts were instrumental to the Comprehensive Peace Agreement in 2005, which brought an end to five decades of civil war in Sudan and ushered in the process through which South Sudan gained its independence.

“The peace was not made in Naivasha [the Kenyan town where the Comprehensive Peace Agreement was signed],” noted Taban. “It was made by women and children in the grassroots.”

A national reconciliation process led by Machar during his tenure as vice president was cancelled by Kiir in 2013 on suspicions that it was being used for Machar’s political ends.

The government has launched another reconciliation process, but since the country has been riven anew by bloody conflict, it, too, lacks universal support.

The church has a long history of being involved in reconciliation in South Sudan. Taban was chief mediator of a process that yielded a peace deal in South Sudan’s Jonglei state in May 2014.

There have been attempts to incorporate the church and civil society into peace talks over the past 18 months, but there have been divisions over who should be present.

“The churches, women, and civil society organisations are freely saying what they want, and this is something that we never saw when we were fighting Sudan,” said Taban.

“But the dilemma is how far can civil society go in [the peace talks in] Addis [Ababa] and offer something. It takes time.”

Taban believes the church has a role to play in guiding the peace process.

“Up to now, the church has not been involved as a guide,” he observed.

“It has only come to sit and listen. It is only IGAD and the political people there. [But] we are training people from different states – youths and so on – to carry on healing and reconciliation work. People don’t see it, but it is already happening,” Taban said.

For Taban, it is paramount that those responsible for the conflict accept responsibility for what they have done.

Some steps have been taken to bring the divided party back together through a process of negotiations between loyalists of Kiir, Machar, and a group of other senior SPLM members, including Secretary-General Pagan Amum, who were ousted from the party at the beginning of the crisis.

An agreement on the reunification of the SPLM was signed in Arusha last January. It mandated that the SPLM leadership make a “public apology” to the people of South Sudan for the devastating impact that the split in the party has had on the country.

Amum was reinstated as secretary-general in June, and immediately echoed the need for such an apology.

The Arusha agreement also states that no one found guilty of war crimes should be eligible for a position in government.

But Taban suggested a different approach. “I believe more in change of heart rather than just change in human bodies,” he said.

“If everybody in South Sudan says I love you, I miss you, I forgive you, I am wrong, I am sorry, we can forget the past. I am sure everyone is waiting for that,” Taban said.

He stressed that foreign countries must also accept responsibility for their role in the conflict.

There is light at the end of the tunnel, but it will require a concerted effort to reach it, said Taban.

“Whatever has been started by human beings can be brought to an end,” he said.

“The world is now one. We are all brothers and sisters. We must all join hands. Help up to stop the violence in South Sudan, so our young people can grow old.”

Bishop Taban was speaking at a round-table event organised by the Royal African Society in London on July 21, 2015.

The post S Sudan war: ‘We need healing to happen at all levels’ appeared first on African Media Agency.