Kigali (AFP) – Rwandan lawmakers voted Tuesday in support of a constitutional change to allow strongman Paul Kagame a third term in power as president, backing a petition signed by millions of citizens. 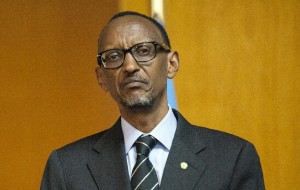 The crowded parliament, packed with members of the public who had come to watch, cheered and chanted Kagame’s name after all lawmakers present in both the lower and upper houses voted in the first step of the process for constitutional change.

“I want to thank all members of parliament for showing support to the people’s wishes,” parliament speaker Donatilla Mukabalisa said.

Any change must be also passed by a national referendum.

Over 3.7 million people — well over half of the voters — signed a petition calling for a change to Article 101 of the constitution, which limits the president to two terms, according to Rwandan media.

“There was a request that we engage the people and consult them about the amendment of 101, and other articles,” Mukabalisa added. “I promise you we are going to fast track the process as requested.”

Parliament was crammed to capacity Tuesday with both lawmakers and the public, with the two chambers holding separate, parallel debates.

Nkusi Juvenal, a member of parliament from the Social Democratic Party (PSD), said that “3.7 million Rwandans from different constituencies and walks of life have spoken, we are their representatives here, we have no option but to… listen to their pleas.”

At one point, lawmakers and the public chanted slogans of support for Kagame.

The public were invited to watch the debate.

“I wanted to participate, so that is why I am here — I am very proud,” Alpha Mundendke said, a 23-year old student in parliament for the first time.

But Jean-Claude Ntezimana, from Rwanda’s tiny but main opposition group, the Green Party, had complained that parliament should not vote on a decision to press ahead with any constitutional changes until their challenge opposing it had been heard in court.

Kagame, 57, has been at the top of Rwandan politics since 1994, when an offensive by his Rwandan Patriotic Front (RPF) rebels put an end to a genocide by Hutu extremists that left an estimated 800,000 people dead, most of whom were Tutsis.

As minister of defence and then vice president, Kagame was widely seen as the power behind the throne even before he took the presidency in 2003, winning 95 percent of the vote. He was re-elected in 2010 with a similarly resounding mandate. The next elections are due in 2017. From the trauma of genocide, he has been painted as a guarantor of stability and economic development, earning praise from donors — and his supporters say many in Rwanda view the prospect of his departure as a step into the unknown. Critics say he has silenced opposition and the media. Kagame says the decision is for the “Rwandan people”. “I have not asked anyone to change the constitution and I have not told anybody how or what to think about 2017,” Kagame said in April. Any change to the constitution would require a vote in support by at least three-quarters of both parliamentary houses, followed by a national referendum.

Neighbouring Burundi has been in turmoil since April when President Pierre Nkurunziza announced his bid to stand for a third term in polls, a move branded by opponents as unconstitutional and a violation of a peace deal that paved the way to end civil war in 2006.