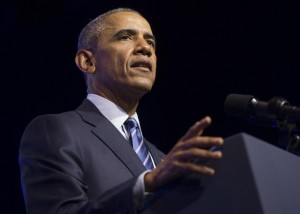 In a letter delivered to the White House, groups welcomed Obama’s planned visit but voiced concerns about “grave and worsening human rights challenges” in his host countries.

“We believe it imperative that you take the opportunity of your visits to meet publicly with pro-democracy and human rights activists,” the letter said.

Citing the arrest of six bloggers in Ethiopia — five of whom have recently been released — and sanctions against two Kenyan human rights groups, the signatories described a “shrinking civic space” in both countries.

Obama’s willingness to meet activists, they said, would afford the groups protection and send a message that Washington stands with them.

Obama is due to visit Ethiopia later this month as well as Kenya, where his father was born.

A presidential visit to Kenya had been put on ice while President Uhuru Kenyatta faced charges of crimes against humanity for his role in 2007-2008 post-election violence.

The International Criminal Court has since suspended that prosecution, citing a lack of evidence and Kenya’s failure to cooperate.

Human rights groups have criticized the Kenya trip, but have also questioned why Obama is visiting Ethiopia so soon after a contested election, which saw the ruling party win all parliamentary seats.

The White House stressed that it frequently addresses issues of democracy and political rights with countries in the region.