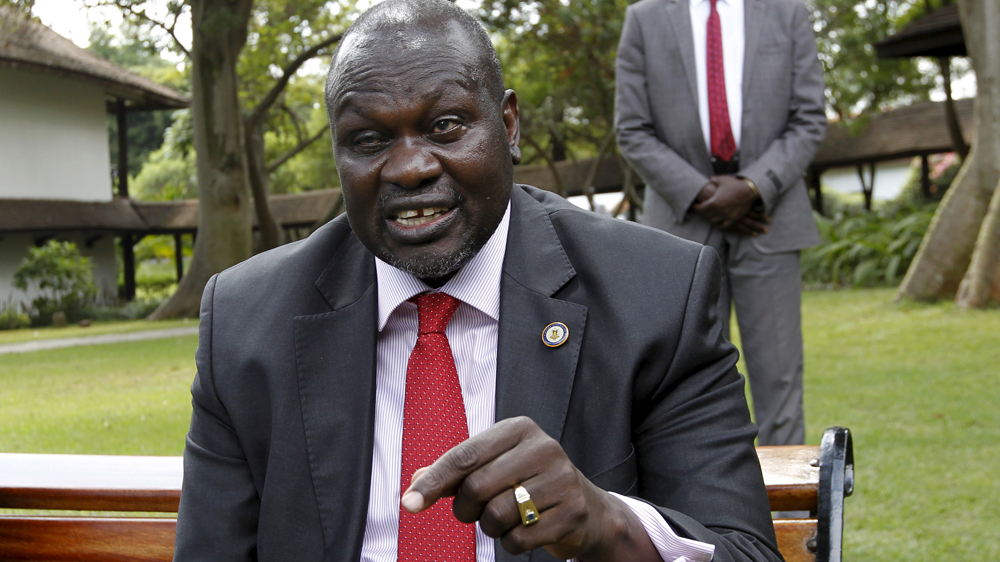 The leader of South Sudan’s rebels has said the country’s civil war will continue as long as President Salva Kiir remains in power.

Speaking to reporters in Nairobi on Wednesday, Riek Machar said the people of South Sudan did not deserve to go back to war and that Kiir had to resign with immediate effect.

In December 2013, Kiir accused Machar, who at the time was his vice president, of planning a coup, setting off a cycle of retaliatory killings that has split the poverty-stricken, landlocked country along ethnic and tribal lines.

“We don’t feel like we have a peace partner with Salva Kiir,” Machar said, adding that previous ceasefires he had signed with the government during the course of the 18-month-old conflict were “born dead”.

“Should President Kiir remain adamant and refuse to hand over power back to the people, then the citizens have every right to rise up and overthrow his regime.”

Machar’s comments come just a day after he told Al Jazeera that he wanted a power sharing deal with Kiir, underpinning the tumultuous relatonship between the two men.

South Sudan’s parliament voted in March to extend Kiir’s mandate by three years, formally ditching any plans for elections originally due to take place this year.

Machar said the extension was meaningless, and that as the original mandate ended on Thursday, the rebels considered the government to be “unconstitutional and illegitimate.”

South Sudan is also preparing to mark the fourth anniversary of its independence from Khartoum on Thursday, an event that marked an end to decades of war but only provided a brief respite from conflict.

No official death toll has been kept.

Crtics say the government and rebel forces that share responsibility for the killings have no interest in tallying the deaths they might one day be held to account for, nor does the UN whose peacekeeping operation has failed to protect civilians.

In November 2014, the International Crisis Group, a think-tank, estimated that as many as 50,000 had died and the killing has continued unabated, while hunger and disease have added even more to the toll.

The UN has described South Sudan as being “lower in terms of human development than just about every other place on earth”.

Machar has rejected accusations levelled at his own troops and insisted he too is a “victim”.

“I am a victim, just like all the other victims who died, except I am not dead,” he said.