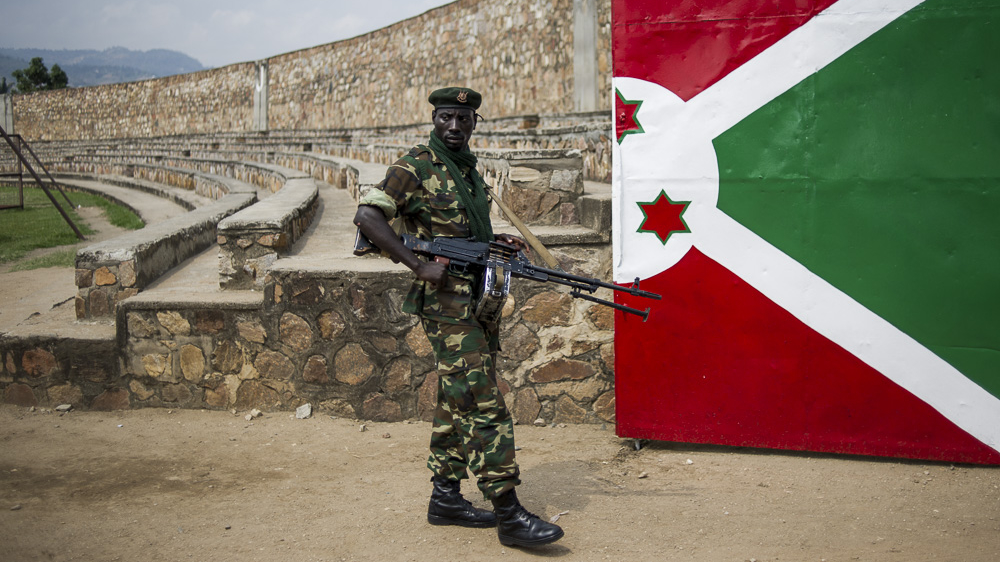 Burundi’s army has captured scores of gunmen and killed others in two days of clashes in the north, a regional governor has said, as security worsened in the east African country.

“About 100 gunmen are in the hands of the army forces,” Anselme Nsabimana, governor of Cibitoke province, which borders both Rwanda and the Democratic Republic of Congo, said.

“There is no more fighting in Cibitoke. It’s calm,” he told the Reuters news agency, adding that rebels some were also killed without giving a number.

President Pierre Nkurunziza’s announcement on April 25 that he planned to seek a third term in office triggered weeks of protests by opponents who say it violates the constitution. The president cites a court ruling say he can run again.

Al Jazeera’s Catherine Soi, reporting from the capital Bujumbura, said the city had been quiet in recent days, though people remained tense.

“There have been a series of police operations in the townships, and people are extremely scared. Many say they don’t want to get involved because they risk being followed by the government,” Soi said.

Details of the fighting in the country’s north are not clear, but residents said gunmen initially fought in Kayanza province on Friday, then withdrew into forests before the army clashed with them on Saturday in neighbouring Cibitoke.

The Kayanza governor said on Saturday that the gunmen had crossed into Burundi from Rwanda, a charge Kigali denied.

The fighting is an alarming development in a region with a history of conflict, often fuelled by ethnic divisions. But an official said it did not follow ethnic divides.

“The gunmen are composed of all ethnic groups and are from different provinces of Burundi,” the governor said, adding that many were from the capital Bujumbura, the scene of weeks of protests against Nkurunziza.

A rebel general, who was involved in a failed coup attempt in May, told Reuters this week he and his comrades were mobilising forces to topple President Pierre Nkurunziza, who has triggered a political crisis by seeking a third term in office.

General Leonard Ngendakumana told French radio on Friday, when the first clashes were reported in north Burundi, his loyalists were involved.

The army could not immediately be reached for comment.

Burundi’s crisis has so far been a power struggle that crossed ethnic divides, but diplomats say an upsurge in violence could re-open ethnic wounds.