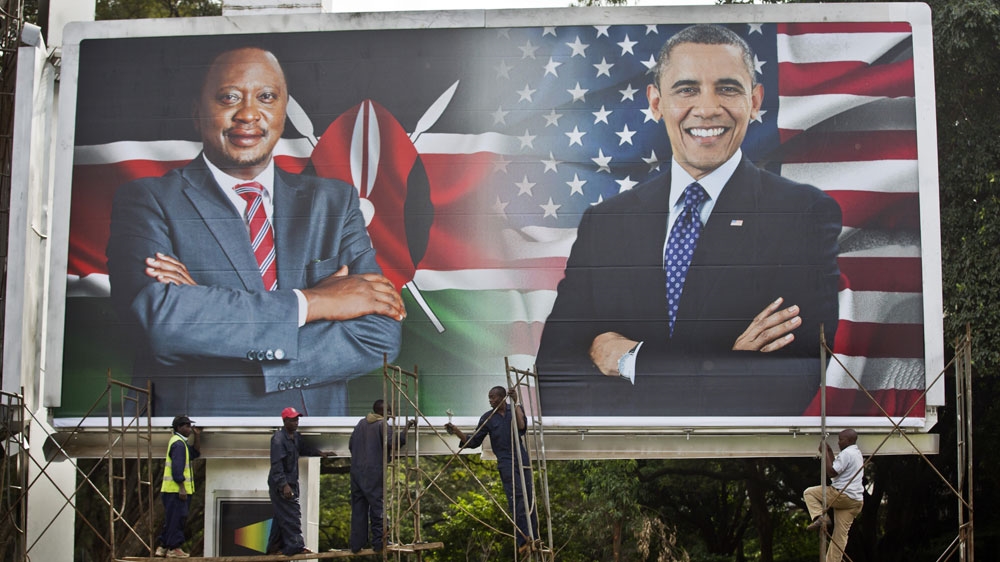 The last time Barack Obama visited Kenya, he was a freshman Democratic Party senator from Illinois and putative global superstar – considering a stab at the United States presidency.

On that occasion, he simultaneously enraged Kenya’s political authorities and endeared himself to many ordinary Kenyans during a lecture at Nairobi University where he described systemic corruption as “a crisis that’s robbing an honest people of the opportunities they have fought for”.

The government was quick to dismiss Obama as “immature” and an opposition “puppet”.

Today, the Kenyan government has prepared a red carpet welcome for him. Despite his blood ties to the country, his return as global potentate has been long in the making and, for most of his tenure, has seemed most unlikely.

In the year Obama was elected president, a chaotic and disputed election in Kenya sparked weeks of violent ethnic conflict which left over 1,000 people dead.

The violence also resulted in indictments from the International Criminal Court (ICC) – two of which were for Uhuru Kenyatta and William Ruto, the pair who were to take over power from Kibaki in April 2013 – just months after Obama’s own election for a second term.

Already unlikely prospects for an Obama visit dimmed considerably when the Kenyan government adopted an anti-Western rhetoric as part of its push to get the ICC cases dropped.

The Kenyatta administration also began to talk up its pivot away from Kenya’s traditional partners in the West and towards China as a potential patron.

However, despite the inflammatory rhetoric, there is little doubt that the Kenyan government craved acceptance by the West. As a recent poll has shown, most Kenyans consider the US, and the West in general, to be a more valuable partner than China.

And Kenyatta is unlikely to have forgotten the humiliation of his visit to the UK for the Somalia Summit shortly after his inauguration, where he was reportedly shuffled in through the cargo section of Heathrow Airport and denied a photo-op with British Prime Minister David Cameron.

Obama then snubbed Kenya during his three-nation Africa tour in June and July 2013. In fact, a handshake between the two at Nelson Mandela’s 2013 memorial service was the closest Kenyatta had gotten to formal Western acknowledgement that year.

The next year would begin on a more positive note – when Kenyatta was invited to the US-Africa Summit in August 2014.

Though nearly every other African president was invited, this did not stop Kenyatta’s team from taking full advantage of the situation.

The invitation to the summit was painted as an indication of Western reconciliation – even though the White House had said there would be no private meetings, the inevitable photo of the Obamas and Kenyattas was widely circulated in the local Kenyan press and on Twitter.

Now, with the coming of Obama to Kenya, Kenyatta can claim a full rehabilitation. The visit will be widely seen as bestowing the much coveted international imprimatur. As Jacob Kushner, an East Africa security expert said, “Symbolically this is very important for Kenyatta […] It demonstrates he’s a part of the international community again.”

Further, the fact that no sitting US president has ever paid a visit to Kenya dented the nation’s self-image as the linchpin in the region. Previous visits by Bill Clinton and George W Bush to neighbouring Tanzania and Uganda, as well as Obama’s trip to Tanzania in 2013, served to rub salt in Kenya’s festering wound of irrelevance.

By securing this visit, Kenyatta can validly claim to have gone some way towards fixing this and rehabilitating Kenya’s image abroad.

This will also be an opportunity for Kenyans themselves to reinforce their relationship with Obama and the democracy he represents. Obama remains popular across the country, with a Pew opinion survey last year showing that 80 percent had confidence in him to do the right thing in world affairs.

However, compared to similar data gathered in 2009, this indicates a drop of 10 percent.

While in 2006, he was largely (and mistakenly) seen as a Kenyan making waves in the US political sphere, and later as “our man” or Africa’s representative in the White House – perceptions of him, and his “Kenyanness” have changed quite radically since then.

As the late veteran journalist Jerry Okungu wrote in 2013, “Kenyans had learned the hard way that Obama was not a Kenyan but an American president.”

Thus this visit will be less a homecoming and more a visit from the head of the world’s most powerful state.

Patrick Gathara is a strategic communications consultant, writer, and award-winning political cartoonist based in Nairobi.