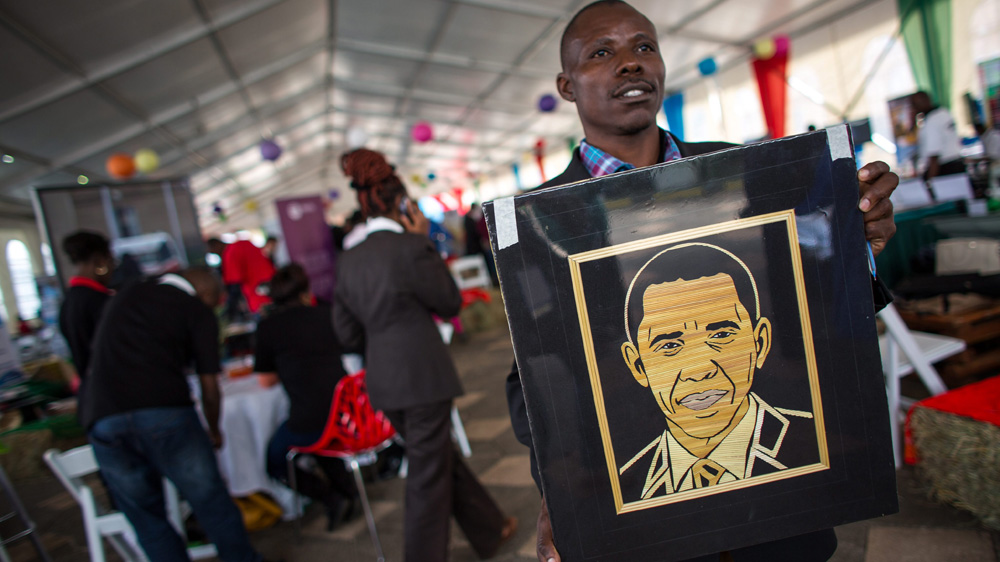 New York, United States – Doing business in Kenya is tough, said Eric Muthomi, but the rewards can be huge. His company, a porridge maker called Stawi, struggles with everything from licensing laws and high electricity costs to the traffic-clogged roads that slow his delivery trucks.

Last year, Muthomi took part in a US-backed scheme to help budding African entrepreneurs. He travelled to the US and met executives from Wal-Mart and Domino’s Pizza to study the supply chains that get their products to customers.

“I took these lessons and tweaked them to the Kenyan scenario,” he told Al Jazeera. Better stocktaking methods and new software have helped cut delivery times to supermarkets from two weeks to two days and sales have grown by 50 percent, he said.

It is the kind of success story that Barack Obama will showcase during his first visit to Kenya, his father’s birthplace, since becoming US president.

The centrepiece of the two-day trip is the Global Entrepreneurship Summit, a yearly gathering of industry leaders and managers taking place this year from July 25-26.

According to analysts, Obama’s visit reveals Washington’s desire to fix ties with Kenya – East Africa’s top economy and a partner in the fight against religious radicals – after they slumped while President Uhuru Kenyatta faced international charges of crimes against humanity.

Obama also faces pressure from rights organisations to use his popularity to address Kenya’s problems with corruption, media freedom, and the battle against militants from Somalia’s al-Shabab group, who have spilled blood in a shopping mall, a university campus among other targets.

RELATED: US holds summit with African heads of state

“It’s great that he’s coming here to spotlight Kenya as East Africa’s hub of business and entrepreneurship, but also to raise issues such as democracy, good governance, and security. We need systems that work to benefit everybody in society,” Muthomi said.

Muthomi will address the entrepreneur meeting – his latest in a series of public speaking appearances since he joined the inaugural batch of 500 young Africans on the Mandela Washington Fellowship, part of Obama’s Young African Leaders Initiative, in June 2014.

He is bullish about Kenya’s economy, which grew by 4.9 percent in the first quarter of 2015. It is one of the world’s fastest-growing markets and part of a long-term expansion across sub-Saharan Africa that is building a middle class of new consumers.

“The UN projects that over 1.8 billion children will be born in the next 35 years across Africa. That’s a huge market that’s available for anybody serving the baby industry, everything from diapers to baby food. There is lots of opportunity,” Muthomi told Al Jazeera.

He is not alone. New tower blocks rise across the capital, Nairobi, as technology start-up firms in its western suburbs seek to build on such successes as the mobile phone money transfer system, M-Pesa. The innovation hub along Ngong Road has been dubbed Silicon Savannah.

Business is booming despite a 7.5 percent tourism slump in the first quarter of 2015. Holidaymakers cancelled trips to safari parks and the Indian Ocean coast following a spate of al-Shabab attacks.

“You can feel the confidence in Nairobi these days, a sense of swagger and bravado on the part of Kenyan elites,” Mark Bellamy, a former US ambassador to Kenya, told Al Jazeera.

“A sense that Kenya, for the first time since independence, really does have its destiny in its own hands and does have options in terms of who it chooses to partner with internationally,” Bellamy said.

Kenyan newspapers have buzzed about “Obamamania” for weeks. The US president has an 80 percent approval rating there and is lauded as “our son”, thanks to his father, Barack Obama Sr, a peripatetic Kenyan economist with whom the US leader had little contact.

Nairobi boasts new flowerbeds, billboards and fresh-laid tarmac ahead of the visit. Vendors sell Obama-themed mugs, caps and mobile phone ringtones. Some are saddened that he will not visit his ancestral village Kogelo, the site of his father’s grave, amid al-Shabab security concerns.

For his part, Obama appears dismayed that he will be tied to his security detail and motorcade, rather than be free to meet with distant relatives, such as his step-grandmother Sarah Onyango Obama, like he did during a visit to Kenya before he was voted into the White House.

“I’ll be honest with you, visiting Kenya as a private citizen is probably more meaningful to me than visiting as president because I can actually get outside of a hotel room or a conference centre,” he told reporters after securing a nuclear arms deal with Iran.

Upon arrival, he will meet his Kenyan counterpart, Kenyatta, whose presidential bid Washington lobbied against because, at the time of the election in March 2013, he faced International Criminal Court charges over his role in the 2007-08 post-election violence.

The court dropped all charges against Kenyatta in December. For Aubrey Hruby, co-author of The Next Africa, Obama’s visit seeks to ease tensions with Kenyatta and build ties with an economy that is eyed by traders in China, India, and Europe.

“It’s a form of normalisation: putting the past behind and moving on with security cooperation,” she told Al Jazeera.

In her book, Hruby argues that Kenya’s economic boom is part of a wave of modernisation and entrepreneurship that is sweeping sub-Saharan Africa and challenging deep-rooted prejudices that the continent is forever blighted by poverty, war, disease, and corruption.

“The pundit’s pendulum will not always swing from Afro-pocalpyse to Afro-optimism,” she said.

“There will essentially be a mixed bag of billionaires emerging at the same time as we see people risking their lives to reach Europe across the Mediterranean. They will exist side by side, in much the same way we as see the super-rich and a homeless population in Washington DC,” said Hruby.

In a letter, Human Rights Watch and 16 other civil society groups urged Obama to address social issues, from gay rights to graft and the harassment of HAKI Africa and Muslims for Human Rights, two groups that criticise the government’s heavy-handed efforts to stamp out terrorists.

“I’m nervous about what happens after the president leaves,” Sarah Pray, an analyst at the grant-making body Open Society Foundations, told Al Jazeera.

“We might see a little action, get some folks out of jail, get the bank accounts of human rights groups unfrozen, but, as soon as the spotlight is removed, then the government passes more repressive legislation and people are rearrested,” Pray said.