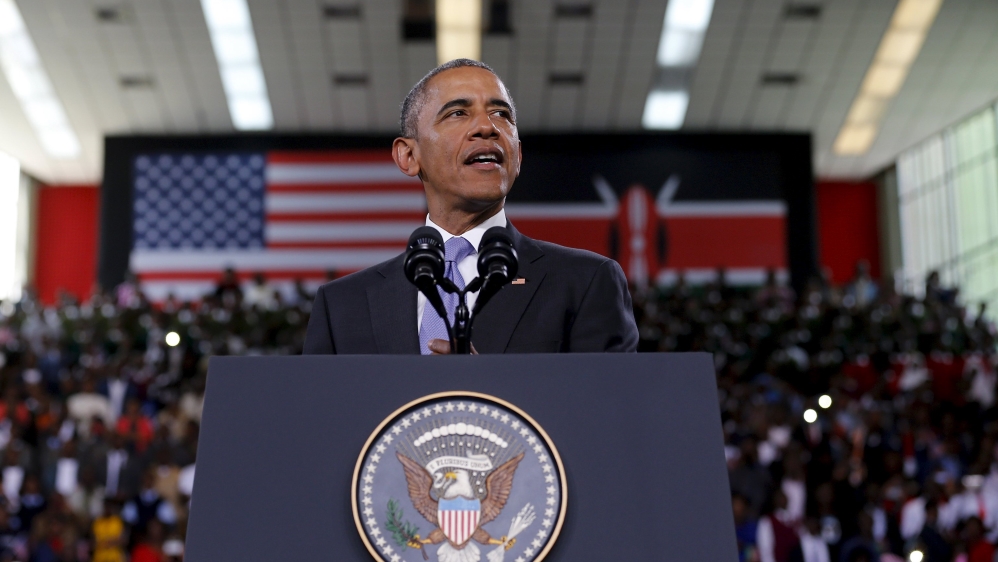 US President Barack Obama, wrapping up a landmark trip to Kenya, has told Kenyans that there is “no limit to what you can achieve” but said they had to deepen democracy, tackle corruption and end exclusion based on gender or ethnicity.

Obama addressed an audience of several thousand packed into an indoor arena in Nairobi on Sunday, before heading to Ethiopia, the second stop on his East Africa tour.

The US president, whose father was born and buried in Kenya, talked of his own experience and Kenya’s in the five decades since independence.

“I’m here as president of a country that sees Kenya as an important partner. I’m here as a friend who wants Kenya to succeed,” he said, after being introduced by his sister Auma Obama to a crowd who had secured tickets to attend.

To a mixture of applause and laughter, he described being picked up at the airport on his first visit to Kenya in the 1980s by his sister in an old VW Beetle that often broke down. This time, he arrived on Air Force One and travelled in the president’s armoured car nicknamed “the Beast.”

“When it comes to the people of Kenya, particularly the youth, I believe there is no limit to what you can achieve,” he said, but he told Kenyans building their nation and the economy required personal effort and responsibility.

On corruption, an issue often blamed for holding back investment, Obama said money spent on bribes would be better paid to someone “doing an honest day’s work”.

Referring to ethnic fighting in which 1,200 people died after a disputed 2007 election, he told Kenyans that politics based on ethnicity was “doomed to tear a country apart”.

He also warned Kenya would “not succeed if it treats women and girls as second-class citizens”.

“It was awesome. It was really inspiring especially for us young people,” Bramwel Rotich, a 24-year-old student, told the Reuters news agency after the speech.

While Obama was greeted by cheering crowds in Kenya, Ethiopians have shown little enthusiasm over his upcoming visit.

Rights groups have called on Obama to publicly meet democracy activists on the ground and have a launched a hashtag on Twitter, #EthiopiansMessageToObama, posting pictures of torture and abuses.

“Authorities will in turn be eager to deflect attention towards the country’s record of growth and poverty reduction as well as increased security cooperation with the United States,” he said.

Obama planned meetings with the president and prime minister in the capital of Addis Ababa.

He will also speak to the continent from the headquarters of the African Union, which plays a role in peace and security on the continent.

It will be the first time an American president addresses the AU.

The post Obama says ‘no limits’ to what Kenyans can achieve appeared first on African Media Agency.