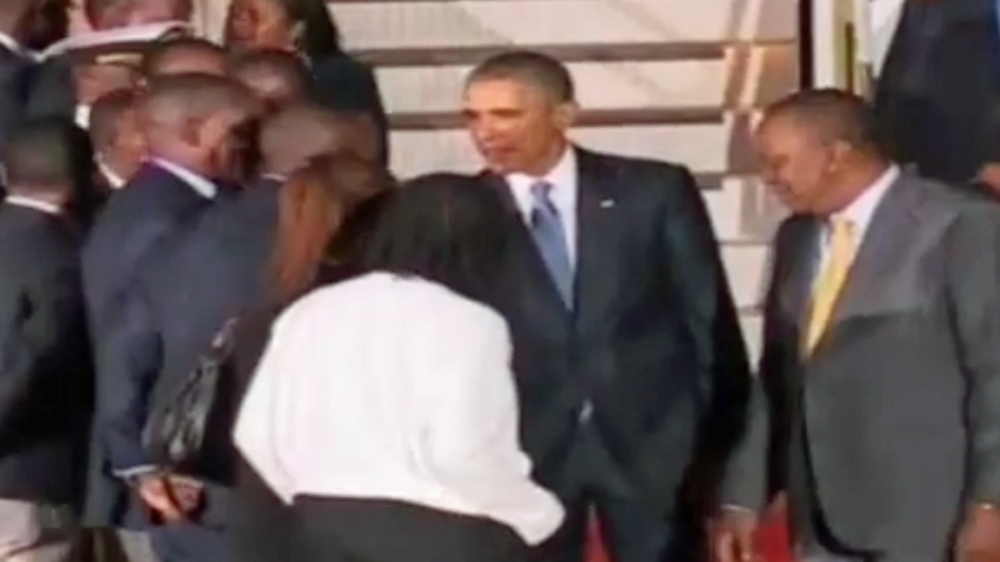 US President Barack Obama has arrived in Kenya on a trip that will also include a stop in the Ethiopian capital, and a visit to the home of the African Union.

Obama landed in the Kenyan capital, Nairobi, on Friday and was welcomed at the airport by the Kenyan President Uhuru Kenyatta.

At least 10,000 police officers, roughly a quarter of the entire national force, have been deployed in the capital Nairobi.

Parts of the Kenyan capital have been locked down and airspace was closed during the president’s arrival, leaving some of the roads empty on Friday afternoon, usually the busiest time of the week when streets are jammed with cars.

The landmark visit to his father’s birthplace is Obama’s first as president, and is also the first time a sitting US president will visit Ethiopia and the AU’s headquarters in Addis Ababa.

The first African-American president of the US is expected to address regional security issues and trade, and also touch on matters relating to democracy, poverty, and human rights in the region.

Before heading off for the trip, Obama’s fourth to Africa since taking office, he spoke about the promise of, and difficulties on, the continent.

“Despite its many challenges – and we have to be clear-eyed about all the challenges that the continent still faces – Africa is a place of incredible dynamism, some of the fastest-growing markets in the world, extraordinary people, extraordinary resilience,” Obama said.

Obama has not yet been to Kenya during his White House tenure, with a previous trip delayed by Kenyan President Uhuru Kenyatta’s indictment for war crimes by the International Criminal Court.

Obama’s trip has also come under fire by rights groups, and more than 50 African and global human rights organisations have called on him to publicly meet democracy activists on the trip.

The charges against Kenyatta, and the fact that Ethiopia’s government won 100 percent of parliamentary seats in a recent disputed election, has raised questions about whether Obama should have made the trip at all.

In Kenya, Obama will attend a Global Entrepreneurship Summit, aimed at promoting businesses that promise to lift many more Africans out of poverty and help insulate societies against radicalisation.

In Addis Ababa, Obama is expected to address leaders of the African Union, remarks that may touch on Africa’s democratic deficit.

There are no official visits scheduled for Obama to see his relatives while in Kenya, officials said.

Al Jazeera’s Andrew Simmons, reporting from Nairobi, said Obama is expected to meet his relatives in the capital, instead of his father’s hometown of Kogelo.

Obama has said he had “never truly known” his father, who was born in Kenya’s far west, in a village near the equator and the shores of Lake Victoria.