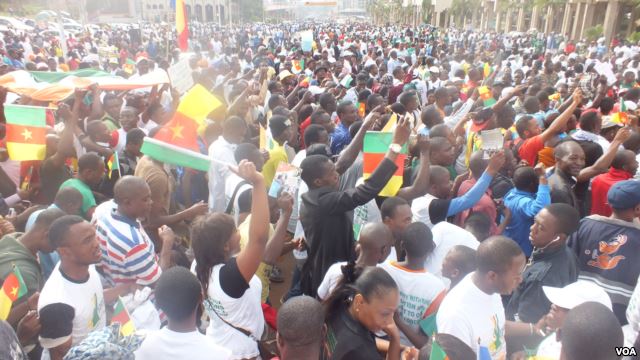 FILE – Youths march in Cameroon against the Nigerian terrorist group Boko Haram, Feb, 28 2015. (VOA/Moki Edwin Kindzeka[/caption] Nigerian President Muhammadu Buhari will travel to Cameroon Wednesday to discuss with Cameroonian President Paul Biya how to tackle the Boko Haram insurgency and piracy in the Gulf of Guinea. The two neighbors have a long history of security challenges. Businessman Eric Odus from Nigeria’s Imo state, who has been in Cameroon for 25 years and is adviser to the Union of Nigerians living in Cameroon, said what the group wants is peace. “When you look around, the economy of the countries is so down because of insecurity. It affects every body, be they nationals, be they foreigners,” said Odus, 50. There are more than 3 million Nigerians living in Cameroon, and they have been joined by 80,000 refugees fleeing the Boko Haram insurgency. Geopolitical scientist Ntouda Ebode said among those seeking refuge are also Boko Haram suspects. Ebode said Nigeria should negotiate a coalition to pursue suspects into neighboring territories because Boko Haram fighters often flee to these areas when they are wanted in Nigeria. Ebode said Boko Haram is receiving support from some countries, has allies in other countries, and has been seizing war weapons from regular armies. Cameroon shares a 2,100-kilometer (1,300-mile) border with Nigeria, spanning across mountains and deserts in the north, dense forests in the south, and 21 border points in the ocean. 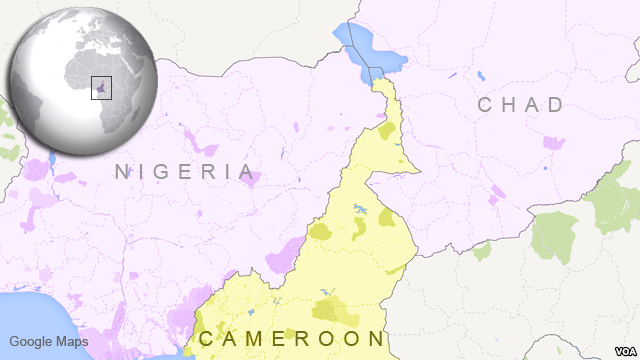 Bloody conflicts made the International Court of Justice order the demarcation of the Cameroon-Nigeria border, and the oil rich Bakassi peninsula was handed to Cameroon. Professor Tazoacha Asonganyi said Biya and Buhari are also likely to discuss dissenting voices from disgruntled Nigerians who want Bakassi back. Bakassi issue “There is a group pushing for Nigeria to take back Bakassi or at least reopen the negotiations, but since he [Buhari] was president [from 1983 to 1985] and since his troops were in Bakassi a lot of water has gone under the bridge,” Asonganyi said. Buhari’s “presidency is a continuation of the presidencies that have been since he left power as a military head of state,” he added. The two presidents are also to discuss piracy. The Cameroon-based international center against piracy in the Gulf of Guinea reports that Cameroon and Nigeria lose between 40,000 and 100,000 barrels of oil per day due to theft. Regular armed conflict has also had an effect on business and slowed investments in the gulf. *Source VOA]]>