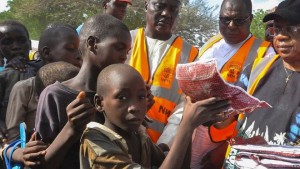 The insurgency has displaced more than a million people, many of whom rely heavily on aid[/caption]

Mr Buhari was speaking in Washington after talks with World Bank officials. He said priority must be given to rebuilding infrastructure and helping those displaced by the conflict. Mr Buhari has pledged to defeat Boko Haram insurgents who have killed thousands in Nigeria since 2009. More than a million people have also been displaced by the insurgency. On Monday, US President Barack Obama pledged his support for Mr Buhari in the campaign against Boko Haram. The US has committed $5 million (£3.2m; €4.6m) to the fight against the insurgents since the Nigerian leader was elected earlier this year. In a statement released on Tuesday, Mr Buhari urged the World Bank to send a team to Nigeria to assess how to spend the funds. The money is expected be given in the form of a loan which will be interest-free for the first 10 years. BBC Africa editor Richard Hamilton says extreme poverty and neglect in north-eastern Nigeria is thought to have fuelled the rise of Islamic extremism and given Boko Haram broader appeal. Mr Buhari also met representatives of the World Health Organization and the Bill and Melinda Gates Foundation to discuss measures to tackle malaria and polio. *Source BBC]]>