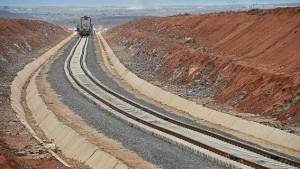 In early June, the East African nations of Djibouti and Ethiopia completed construction on a 481-mile railway (pictured above) that connects the port of Djibouti to the landlocked Ethiopian capital Addis Ababa. The railway, scheduled to be operational in October, will reduce the travel time from two days to ten hours. The port of Djibouti currently controls 90 percent of imports to Ethiopia and is considered vital to the economic vitality of Ethiopia and the region.  Ethiopia’s economy is projected to grow at 8 percent in the next five years, which will increase traffic on the route from 1,500 trucks per year to 8,000.  The electrified railway will be able to carry 3,500 tons of goods, seven times more than previously existing transport systems. The railway is the latest in a series of infrastructure rebuilding projects, including a light rail system completed earlier this year, Ethiopia has undertaken to modernize its modes of transportation. The project will continue with the construction of several hydroelectric dams and 3,000 miles of new rail lines by 2020. The government of Djibouti has also taken steps to solidify its place as the transportation hub of East Africa. The modern transportation infrastructure plan includes the construction of six ports and two airports. The improved efficiency will benefit job growth in Djibouti and further fuel the economies of East Africa. The Chairman of Djibouti’s Port Authority aspires to create a transcontinental railway that extends into West Africa.  The project represents the continued economic momentum for the African continent; home to many of the world’s fastest-growing economies. *Source Africa Update]]>