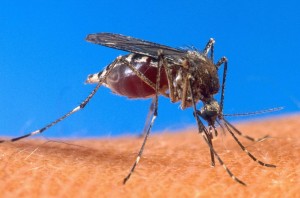 Malaria, the mosquito-borne disease kills some 584,000 people per year — more than 75 percent of them children under five, according to the WHO (AFP Photo/Ho)[/caption] London (AFP) – The world’s most advanced malaria vaccine got the nod Friday from European regulators, despite mixed trial results, for eventual use in children in African countries plagued by the killer disease.

Dubbed Mosquirix or RTS,S, the drug received a “positive scientific opinion” from the European Medicines Agency (EMA) following decades of research and millions of dollars of investment.

But it has yet to pass a final World Health Organization (WHO) hurdle, and may not become available before 2017.

Mosquirix is the most clinically-advanced vaccine against the mosquito-borne disease that infects some 200 million people and kills about 600,000 every year, more than 75 percent of them children under five.

In sub-Saharan Africa alone, the plasmodium parasite kills about 1,200 children on average per day, according to the WHO.

The EMA’s Committee for Medicinal Products for Human Use had analysed the quality, safety and efficacy of the drug, and its benefit-to-risk ratio, “for use outside the European Union”.

Next, the WHO must decide whether to recommend Mosquirix’ use in vaccination programmes — after which it will be up to national regulators to licence the drug.

WHO spokesman Gregory Hartl said the UN’s health body should make the decision by November.

Developed by GlaxoSmithKline, Mosquirix is the first malaria vaccine to reach the stage of being assessed by a regulatory agency.

“The EMA assessment is not a recommendation to use this vaccine,” Hartl underlined.

The WHO has yet to “look at how the vaccine is produced and if it is produced well enough and under proper manufacturing conditions so that we can have faith in ordering it for the UN system,” he told journalists in Geneva.

Mosquirix may become the first licenced vaccine against a parasitic disease, but Hartl underlined: “We understand that 2017 is the earliest that this may occur.”

It is meant to shield children between six weeks and 17 months of age, and also protects against hepatitis B.

In April, the results of a years-long trial with 15,500 children in seven African countries were published in The Lancet medical journal — announcing mixed success.

The drug offered only partial protection that waned with time, researchers found, but even so could prevent millions of cases.

The EMA committee concluded that despite the vaccine’s limited efficacy, “the benefits of Mosquirix outweigh the risks,” said a statement.

The malaria parasite has developed resistance to successive treatments. While there is a limited medicine chest available, insecticide-treated bed nets remain one of the most effective prevention methods.

GSK boss Andrew Witty said Friday that Mosquirix on its own was “not the complete answer”. 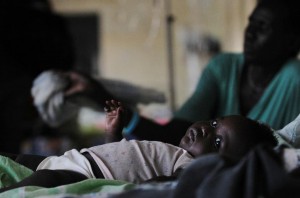 “Its use alongside those interventions currently available such as bed nets and insecticides would provide a very meaningful contribution to controlling the impact of malaria on children in those African communities that need it the most,” he said in a statement.

Added Hartl: “Any financing for this vaccine must not draw resources away from scaling up bed-nets, effective drugs and rapid diagnostic tests for malaria.”

GSK said it would provide the drug at a “not-for-profit price”. “Every day, I see first-hand the enormous toll malaria takes on children, families and communities here in Kenya and across Africa,” Patricia Njuguna, a principal investigator on the Kenyan leg of the drug trial, said in a statement. “The prospect of a malaria vaccine coming one step closer to reality is good news.”

David Schellenberg, a professor of malaria at the London School of Hygiene & Tropical Medicine, said EMA decision came at a key moment, “when insecticide and drug resistance threaten the cornerstones of malaria prevention and treatment”.

“Although RTS,S has only partial efficacy it can clearly contribute to further major gains in malaria control if used judiciously,” he said in comments via the Science Media Centre.