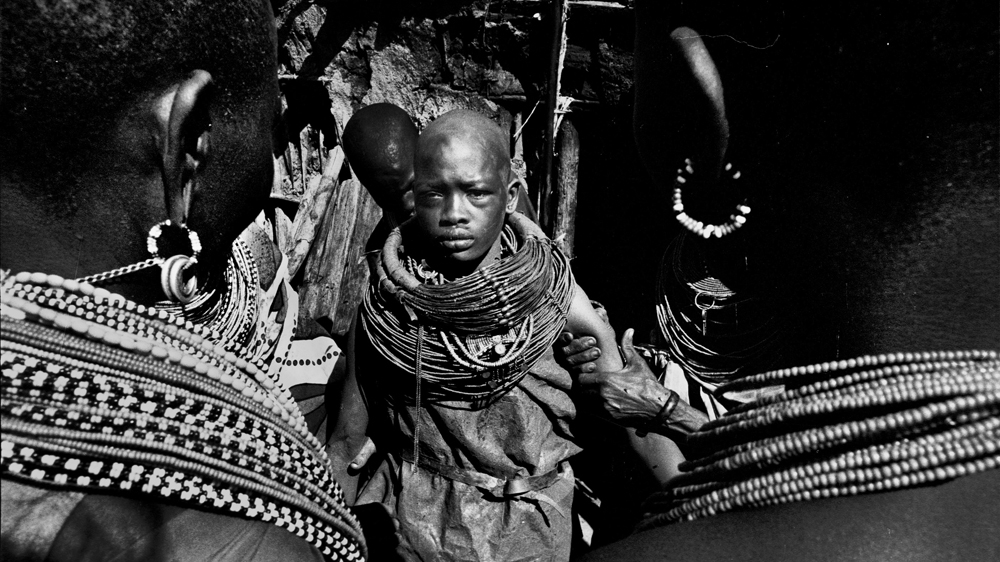 Juliana was thought to be 16 or 17 on the day she was held down while an old woman cut at her genitals with a razor blade – although her family couldn’t say for sure, because in this remote part of Kenya no record was ever made of her birth.

She was to be married the following day – becoming the second wife of a man from a village 140km away from her own. And as Samburu tradition dictates that only circumcised girls can be wed, she was to undergo a most extreme form of Female Genital Mutilation (FGM) called excision, whereby the external genitalia, including the clitoris, is removed.

I was there to witness this because I had been permitted to photograph her three-day wedding ceremony.

It began with a day of preparation, when Juliana’s head was shaved, her wedding outfit finalised, a goat skin bracelet tied around her wrist for protection and animal skins blessed.

Then came the day of the excision.

It commenced early in the morning with a fertility ritual that involved Juliana’s mother milking a cow while wearing a blessed goat skin, after which Juliana stood naked on the skin as the woman selected to perform the excision poured the milk over her head.

It was difficult to determine exactly how old this woman was. What was clear, however, was that she was legally blind, most likely as a result of cataracts.

Despite this, she insisted that she was able to perform the procedure by ‘touch’. Conducting excisions and assisting in the delivery of babies provided her only form of income, she explained.

Only women are allowed to be present for the procedure and several were required to hold Juliana down.

Being selected to do so is considered an honour – conferring an almost god-motherly status – and when I was invited to participate in this way, I had to cite the need to photograph as a way of politely declining.

I truly can’t remember how long it lasted – perhaps five minutes, maybe 10, possibly longer. When I look back on it now, it is all a blur.

But I do recall the women covering Juliana’s mouth so that her screams could not be heard as it is considered a dishonour upon the family if a girl cries out as a razor blade is taken to her genitals.

When the cutting was finally over, butter made from cow’s milk and fat was applied to the area to aid the healing process. Juliana lay bleeding inside a hut as the celebrations continued around her.

The bleeding continued throughout the night and into the next day – the day of the wedding.

She was so weak and I was so worried about her that I asked her mother and older brother, the head of the family, if I could take her to the hospital. But the ‘circumciser’ convinced them that drinking Sarooe, a mixture of cow’s blood and milk, would suffice and help replenish the blood she had lost.

Unable to stand without support, Juliana was dressed in her wedding skins and carried to the ceremony.

The elders held their sticks aloft, forming an arch facing Mount Kenya, where the Samburu god, Nkai, is believed to reside.

The bride, groom and best man are supposed to walk through the arch, receiving the blessings of those on either side, but Juliana had to be carried by the best man.

It is the responsibility of the best man to attend to the bride on the journey to her new home; carrying her when she can walk no further and providing her with food and water along the way.

But Juliana’s husband’s village was so far away, I feared she would never make it. I insisted that her family allow me to drive her to the nearest hospital instead and, thankfully, this time they agreed.

Despite Samburu tradition dictating that a girl leave her family behind once married, Juliana’s brother came with us to the hospital, where a doctor confirmed what I had suspected might be the case: Juliana was probably no older than 12 – and she needed to be operated on.

I went into the surgery with her, and as there were no nurses present was asked to hold her down as she was injected with local anaesthetic.

The memory of those moments haunts me to this day: being unable to communicate what was happening to her, as she spoke neither English nor Swahili, as she was once again pinned down while enduring unimaginable pain. I am sure she must have looked into my eyes and seen somebody responsible for her suffering.

Once the anaesthesia had taken effect, the doctor was able to see more clearly just what had been done to Juliana – there was a deep cut in her vaginal muscle.

She stayed overnight in the hospital and I picked up the bill.

Then, the following afternoon, her brother set off on foot to his village, while I drove Juliana, her husband and the best man to theirs. There, she would be cared for by her mother-in-law until she had healed sufficiently to move into her own hut and consummate the marriage.

Then, as a second wife, her responsibility would be to attend to her husband’s cattle – entrusted with the Samburu’s most valuable possession.

I know I crossed a journalistic line that day – and I have crossed many more in the years since. But I have always been clear that I am a humanitarian first and a photojournalist second. If there is something I can do to help prevent harm, I will.

The Kenyan government passed the Prohibition of FGM Act in 2011, prescribing imprisonment or a fine for anybody convicted of practicing FGM or deemed responsible for a death as a result of it.

But I fear this will simply force it underground and know that had this law been in place when Juliana endured it, her family would never have allowed me to take her to the hospital and she would have almost certainly died.

I still think of Juliana often, although I have lost touch with her family and have no way of knowing what became of her. Did she heal properly? Does she have children? Did she even survive childbirth?

This article first appeared in the March issue of the Al Jazeera Magazine. Download it for iPads and iPhones here and for Android devices here.

The post Magazine: A witness to FGM appeared first on African Media Agency.