During the 2014 National African Immigrant Legislative Week organized by the Cameroon American Council, African immigrants and allies engaged with the White House, Government agencies such as FCC (Federal Communications Commission), SBA (Small Business Administration) and several Members of Congress.
Picture below at the FCC with former FCC Chair Ms. Mignon Clyburn (daughter of Congressman James Clyburn of South Carolina.[/caption] Advocating For African Immigrant rights is a fight that Sylvie Bello has put other things in life on pause to engage in. As head of the Cameroon American Council-CAC, Bello has emerged as the leading voice in making African immigrants matter with policy makers in the USA. She is a regular fixture at Congressional hearings, she has toured dozens of states, held meaningful consultations with numerous state and federal officials and remains determined to ensure that the African immigrant does not continue to be short changed. African immigrants are not only a rising demographic group but ranked amongst the most intellectually savvy and enterprising says Bello. Despite the cost and toll of the fast pace life in the USA, Bello thinks that African immigrants need to pay more attention to developments and opportunities in their cities. With all the nurses we have, how many Africans are in nursing boards? How many Africans are in school boards? It is not enough to sit behind and complain says Bello as she challenges Africans to use their potential to help make the difference in activities of interest in their communities.   https://soundcloud.com/multimedia-podcast/cameroon-american-council-interview     An alumni of the first Obama campaign, Bello literally cut short a promising career in accounting to join the bandwagon of cheer leaders who made the dream of an African American President a reality. Building on experience garnered from the campaign, Bello found a new calling in advocating for immigrant rights. Using the Cameroon American Council as her platform, Bello can boast of a number of achievements from the Affordable Care Act taking local languages into cognizance, to the recent Temporary Protected Status -TPS expansion which provided vital relief to Africans from Guinea, Liberia and Sierra Leone hit hard by Ebola. [caption id="attachment_18991" align="alignleft" width="225"] 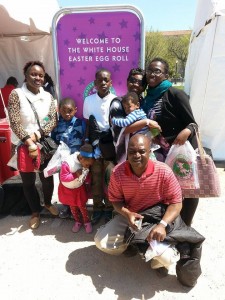 Through the Cameroon American Council over 5000 Africans and allies have engaged with the White House. Picture above from 2014 White House Easter Egg Roll[/caption] On the TPS, Bello says it was a hard fought battle with the Cameroon American Council making a direct pitch to numerous congressmen to make the feat possible. With the engagement and networks cultivated in the five years of existence for the Cameroon American Council, Bello says the next mission is to lobby for the creation of a Congressional African Caucus. This will definitely up the ante when it comes to articulating issues specifically related to Africa says Bello. For all the tough talk, Bello admits that there is relative progress when it comes to Africans engaging on public affairs. From New Jersey to Maryland and other states, she was able to cite examples of Africans occupying public office or running for them. More need to get engaged, she charged. Resources remain a big impediment to the advocacy work of the CAC. The Organization is fortunate to share space at the Cultural DC  incubator with an Arabic Diaspora group. With support from a few donors and church groups, the CAC has been able to do the best it can with minimal resources. Not known to back down from challenges, Bello and the CAC remain committed to doing advocacy for the African immigrants and articulating issues of interest to them. *Information on the work of the CAC and how to support is available online]]>