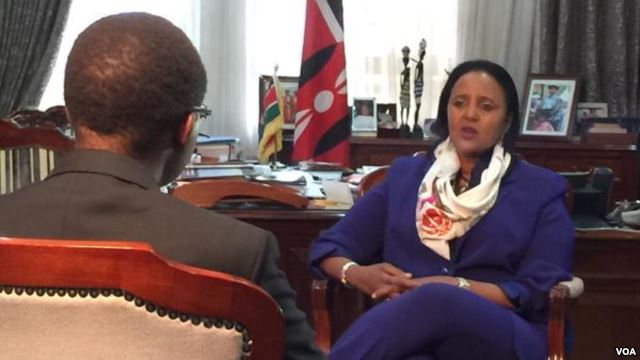 Kenyan Foreign Secretary Amina Mohamed talks to VOA’s Vincent Makori about U.S. President Barack Obama’s upcoming visit in Nairobi, Kenya, July 23, 2015. (Photo: Arash Arabasadi / VOA)[/caption] Kenya’s cabinet secretary for foreign affairs says the upcoming visit of U.S. President Barack Obama is a strong endorsement for the country, and hopes it will lead to greater investment. In an interview with VOA’s Vincent Makori in Nairobi Thursday, Cabinet Secretary Amina Mohamed said President Obama’s visit with the government shines a positive light on Kenya and the administration of President Uhuru Kenyatta. “I think his coming now is just recognition of the kind of leadership that we have, a pragmatic, energetic, passionate, driven leadership, but also recognition of what Kenya has been able to achieve in the last few years,” she told VOA. Previous tension Kenya’s relations with the United States have been strained at times, especially when President Kenyatta and his deputy William Ruto were facing charges at the International Criminal Court (ICC) for their alleged roles in violence that followed the 2007 presidential election. But now the tensions appear to be in the past. Obama is expected to arrive in Kenya on Friday to co-host with Kenya a Global Entrepreneurship Summit. With business leaders from around the world coming in for the meeting, Mohammed said she hopes to see some new investments in Kenya. “Everything is on the table, we are hoping, again, that a lot of investment will flow in. We are taking center stage because the U.S. president is coming. I think everybody is interested in knowing what is in this country that is being visited and what can this country offer,” she said. Al-Shabab threat [caption id="attachment_19444" align="alignright" width="640"] 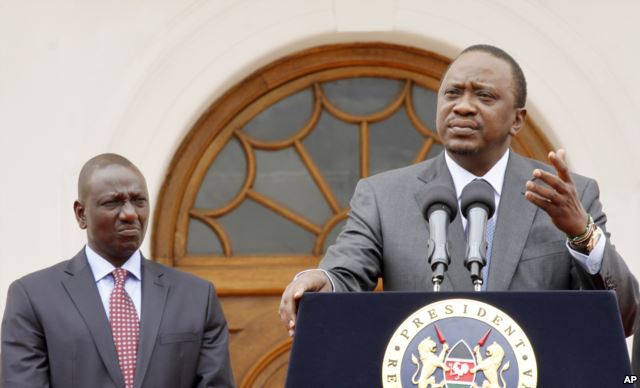 FILE – Kenya’s President Uhuru Kenyatta, right, accompanied by Deputy President William Ruto, left, speaks to the media about the upcoming visit of U.S. President Barack Obama at State House in Nairobi, Kenya, July 21, 2015.[/caption] Aside from trade, another major issue on the agenda during Obama’s visit is the state of security. Kenya, which shares a border with Somalia, has been repeatedly targeted by the Somali-based militant group Al-Shabab. Mohamed said the U.S. has remained a strong partner to Kenya in the fight against terrorism. “Our collaboration, especially on security, is historic, it’s always been there, but of course we’ve enhanced it a lot in the last few years because of the threat – the global threat actually – that we all face,” she noted. ” You know insecurity is not unique to this part of the world.” Kenya has also played a role mediating regional crises, including the dispute in Burundi over the president’s controversial bid for a third term in office. Regional crises Burundi is still counting the votes from the presidential election held Tuesday, and Mohamed said regional leaders are still considering whether or not to accept the results. “There is talk about not recognizing the election results, we are consulting, we are consulting with the African Union and consulting with the East African Community about what the way forward is, and to get ourselves out of the fog,” she said. Mohamed also said she is hopeful for a resolution soon to the crisis in South Sudan, where a political dispute between two rival leaders sparked a civil war that has left thousands dead and has displaced more than two million others. *Source VOA/Yahoo]]>