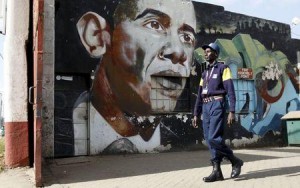 A security guard walks past a wall mural depicting U.S. President Barack Obama outside the Go-Down Art Centre in Kenya’s capital Nairobi, July 17, 2015. REUTERS/Thomas Mukoya[/caption] KOGELO, Kenya (Reuters) – When Barack Obama visits Africa this month, he will be welcomed by a continent that had expected closer attention from a man they claim as their son, a sentiment felt acutely in the Kenyan village where the 44th U.S. president’s father is buried.

“We thought the American government could at least bring some assistance to the area,” said Stephen Okumu Obewa, a teacher in Kogelo village who works at Senator Barack Obama Primary School, named before Obama reached the White House.

“Maybe he is interested somehow but we are not aware,” he said in a scruffy school with many broken chairs and desks.

Obama wrote about a visit to Kogelo in his 1995 book “Dreams from My Father”, which helped launch his swift political ascent.

Some of the fame rubbed off on the village. Tourists turned up and visitors often knock on the door of Mama Sarah, as Obama’s step-grandmother is known.

Nearby is the grave of his father, the senior Barack Obama, a Kenyan government economist who died in a car accident in 1982, 21 years after fathering the future U.S. president while living in Hawaii as a visiting student.

Many Africans wonder why Obama has not made development on their continent more a priority in his two terms in office.

“With his election, there was this huge euphoria and high hopes that the U.S.-Africa relationship would see substantive improvements and the U.S. would give more attention to Africa,” said David Zounmenou, a research fellow at the Institute for Security Studies in South Africa. “But the record is very weak.”

Obama visits Kenya and Ethiopia later in July, his third major trip to Sub-Saharan Africa after traveling to Ghana in 2009 and to Tanzania, Senegal and South Africa in 2011. He has also visited Egypt, and South Africa for Nelson Mandela’s funeral.

“My hope is that we can deliver a message that the U.S. is a strong partner not just for Kenya, but for Sub-Saharan Africa generally,” Obama said last week. He said he hoped to build on progress made in health, education and counterterrorism, and to encourage democracy and reducing corruption.

U.S. officials say the perception Obama has ignored Africa is unfair. They point to U.S. efforts to contain the Ebola virus in West Africa and a $7 billion continent-wide initiative to expand electricity supply that was launched in 2013.

But that is a tiny sum compared to the many billions that China has been spending on infrastructure in Africa, bringing roads, airports and railways to a continent with almost 1 billion people and an emerging middle class.

Nor does Obama have a signature African achievement, unlike his two predecessors.

George W. Bush was lauded for funding HIV/AIDS treatment across the continent. Bill Clinton signed a law which sharply reduced trade restrictions on imports from 35 African states. Obama, who leaves office in January 2017, has carried on both initiatives, but cannot claim them as his own.

“To me, he’s not like an African man. He doesn’t even have a building or a business here,” said Calvine Rachuonyo, 28, who drives a motorcycle taxi in Kisumu, the nearest big city to Obama’s father’s western Kenyan home village.

In Kenya, his visit could attract some protests, most likely small. Members of one fringe anti-gay group are planning to protest naked in the capital on the eve of Obama’s visit because of his support for gay rights. A student group says it will defile a tree that Obama planted before he became president at Nairobi University, unless he returns there for another visit.

Still, the upcoming arrival has meant an uptick in business for Victor Agwa, who sells Obama trinkets and t-shirts, some emblazoned with the words “Son of Africa”, in Kisumu.

Agwa sold a thousand T-shirts before Obama’s first election in 2008. Since then, business has steadily declined. “People have a feeling that maybe he got too busy to come here,” he said, hoping for more visits when Obama leaves office.

U.S. Ambassador Robert Godec has said Obama would not visit Kogelo, and that he will instead address the Kenyan people at a Nairobi stadium on July 26.

But Kogelo residents are still preparing just in case Obama does turn up, including sprucing up the grave site of the president’s father.

“The gate is always open for Barack, day and night,” said Mashart Onyango, who lives on the family compound and said she was one of Obama’s aunts. “He is our relative.”