The Anglophone struggle in Cameroon has, in the main, been a political manifesto aimed at reasserting the statehood of Southern Cameroon, West Cameroon or Anglophone Cameroon, appellations that depend on the generational shift or liberation mind-set of the advocates.

From Gorji Dinka to Chief Ayamba through Elad-Munzu-Anyangwe and Albert Mukong, and of recent the 2015 groundswell Federalism clamor, the search for a statehood among Anglophone Cameroonians both at home and in the Diaspora has been political; of course the very construction and deconstruction of that statehood was political having been subjected to the historical experiences of Southern Cameroon, West Cameroon state and today mere Regional spaces.

This political mutation of the Anglophone Cameroonian points to one constitutional travesty – the degeneration of a viable nation from a constitutional political entity to a parochial and colonial linguistic definition and also to a malleable geographical delimitation.

In spite of the controversy and even conspiracy in charting a common political vision among the Anglophones themselves, many have laid down their lives for the cause of an ante-1972 status quo. Unperturbed by the annual October intimidations and sporadic incarcerations, others continue to make their voices heard on what has come to be known as “the Anglophone problem”.

However for some it has taken too long and for others it may not happen in their life time. While the political adrenalin continues to flow, may I, from the vantage point of a cultural practitioner invite the Anglophone Cameroon Diaspora to tap from its cultural entrepreneurship; for if the constitutional rape of the geo-political territory has had both political and economic toll, part of its redemption can be situated within the building block of a dynamic and potent creative industry within that same geo-political territory.

Today’s national political rainbow threatens by omission or commission to eclipse the distinct Anglophone cultural colours needed to radiate the geo-political territory. Since the law on media liberalisation in 1990, not a single Anglophone Cameroonian has set up a private Television of national recognition in Cameroon. The Francophone-owned T.V stations practise a lopsided bilingual and bicultural programming that, for a shrewd commercial purpose or an erroneous linguistic data, obscures Anglophone interest and value.

Yet I have written elsewhere (See the article “STV – the dream and the drift”) that the early euphoria of Cameroon T.V (CTV) in its formative years was due to the daring and telegenic character of Anglophone journalists and the interactive programmes produced in English. The few Anglophone privately -owned radios are mainly corporate (Church) and so gospel focused. They all pale into shadow when compared to the politically vocal and development sensitive francophone owned radio stations beaming from Littoral to the South West and from West to the North West Regions.

The print industry still lacks a news magazine of International repute when compared to Blaise Pascal Talla;s Jeune Afrique Economie magazine, Marie Roger Biloa’s Africa International and ICI, the Ghanaian-inspired NewAfrican magazine ,the Nigerian-inspired Africa Today , News Africa, and The Voice magazines all published in the Diaspora. My first invitation to the Anglophone Cameroon Diaspora is to consider investing in the media world in the geo-political territory.

Yet without any resort to colonial linguistic xenophobia, British – colonised Africa is the cradle of creative industries with a stiff competition from francophone West Africans. Apart from being a poverty alleviation tool, cultural entrepreneurship stamps a national identity even on those who have been dispossessed and disempowered of their political statehood.

In fact even those countries in Africa which, because of their protracted political instability and neocolonial economic servitude are now considered as failed, collapsed, rogue or bunker praetorian states, derive their political existence from their creative industries. My second invitation therefore to the Anglophone Cameroon Diaspora is to consider investing in the Arts and Culture industry as producers and publishers of Anglophone works of art.Another area needing intervention is the twining of economic investors in the Diaspora and the civil society organizations in the geopolitical territory.Of particular concern is the agro-pastoral sector that should lay to rest the parasitic economy paradigm of cash crops.

My third invitation therefore to the Anglophone Cameroon Diaspora is to consider connecting with other home civil society organizations in order to create small, medium scale industries or enhance the culture of agro-industrial establishments. Lastly, one of the most concrete political legacies in recent memories in the Anglophone liberation paradigm is the creation of the G.C.E Board and the University of Buea.

As institutions that are engaged in fine tuning our educational system, they should end up seeing their products become job creators rather than job seekers. One of the greatest sources of unemployment today is the absence of a vocational, technical or creative career that leads our children into a productive rather than a consumer society.

Privately-owned schools in the Anglophone sector still focus on General or Grammar Education rather than on Professional or entrepreneurial input. Compounded by the grim reality that the few Government-owned professional schools in the geopolitical territory have been inundated with Francophones, there is still a remedy in establishing privately-owned schools along the spirit of the Government Trade Center Ombe, Polytechnique (School of Engineering) Yaounde, and Business Administration school in Douala.

Yet there has never been a time for the Diaspora to network among themselves in their various abodes of physical and psychological exile to weave a tapestry of collective survival for their people back home. When former Malian President Ahmadou Toumani Toure convened a National Conference in 2004 in Mali, it was to build a synergy between the Malian Diaspora and the economic/cultural battle at the home front.

When the African Union decided to include the African Diaspora (though they have a different historical connotation) as the 54th state of the African continent, it was in recognition of the vital forces inherent in such a group towards the economic and cultural empowerment of Africa.

When former Prime Minister Ephraim Inoni of Cameroon led a 15-person delegation to the United States of America in July 2005, it was to convince Cameroonian Diaspora to link with their motherland in the fight against poverty.

From a global dialectics of history, an interface between the Anglophone Cameroon Diaspora and their geopolitical territory on cultural entrepreneurship is a vital ingredient in the political search for constitutional redress. It may, like other experiments, fail to achieve the ultimate political goal; but in my opinion every cultural enfeavour carries recipes needed for the renaissance of any political kingdom. 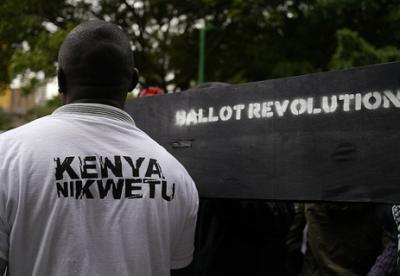 Kenya’s 2013 Election: Will History Repeat Itself?