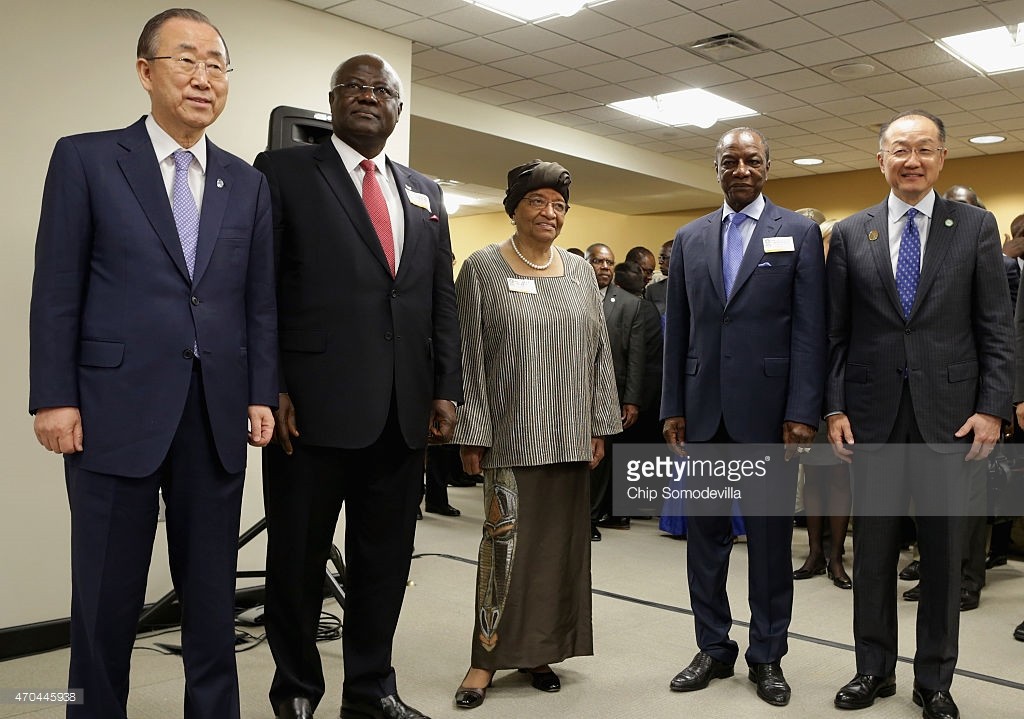 ,United Nations Secretary-General Ban Ki-moon, Sierra Leone President Ernest Bai Karoma, Liberia President Ellen Johnson Sirleaf, Guinea President Alpha Conde and World Bank Group President Jim Kim pose for photographs after meeting about the ongoing fight against the Ebola outbreak in West Africa during the World Bank-International Monetary Fund Spring Meetings April 17, 2015 in Washington, DC. The World Bank announced Friday that it would provide an additional US$650 million over the next year to help Guinea, Liberia and Sierra Leone to recover from the social, economic and health impact of the Ebola crisis.Pic Credit Chip Somodevilla,Getty Immages[/caption] The international community has pledged more than five billion dollars to support Guinea, Liberia and Sierra Leone in their efforts to recover from the devastating effects of Ebola, at a high level United Nations Conference in New York today (Friday).   Opening the International Ebola Recovery Conference United Nations Secretary-General Ban Ki-moon said: “Together, let us jumpstart a robust recovery process over the next two years, and usher in a better future for generations to come.”   The Secretary-General was joined by the Presidents of Guinea, Liberia and Sierra Leone, and the Secretary-General of the Mano River Union, who were seeking international support as well as financial commitments for their national and regional recovery strategies over the next two years.   Helen Clark, UNDP Administrator, who chaired the Conference, said: “We have seen a very encouraging response today. The preliminary figure for funds announced today amount to $3.4 billion, taking the total resources pledged for the recovery of the Ebola-affected countries to around five billion dollars. The whole spirit of optimism around the conference and the willingness of partners to see this as a long-term endeavor is hugely encouraging.”   Dr. David Nabarro, the Secretary-General’s Special Envoy on Ebola, said: “This is a very promising moment. The amount pledged represents a tremendous springboard for recovery. Everyone today has stressed that the partnership we have for the response to the outbreak must be sustained in to the period of recovery. The world is going to stand by these countries as they recover and help them get back on the track of equitable economic and social development.”   The United Nations organized the International Ebola Recovery Conference in partnership with the African Union, European Union, the World Bank and the African Development Bank. A day of technical consultation on the recovery strategies on Thursday 9 July was followed by the high level event on 10 July, convened by the Secretary-General, and attended by the Chairperson of the African Union, the Presidents of Guinea, Liberia and Sierra Leone and the Secretary-General of the Mano River Union. *Source APO/UN]]>