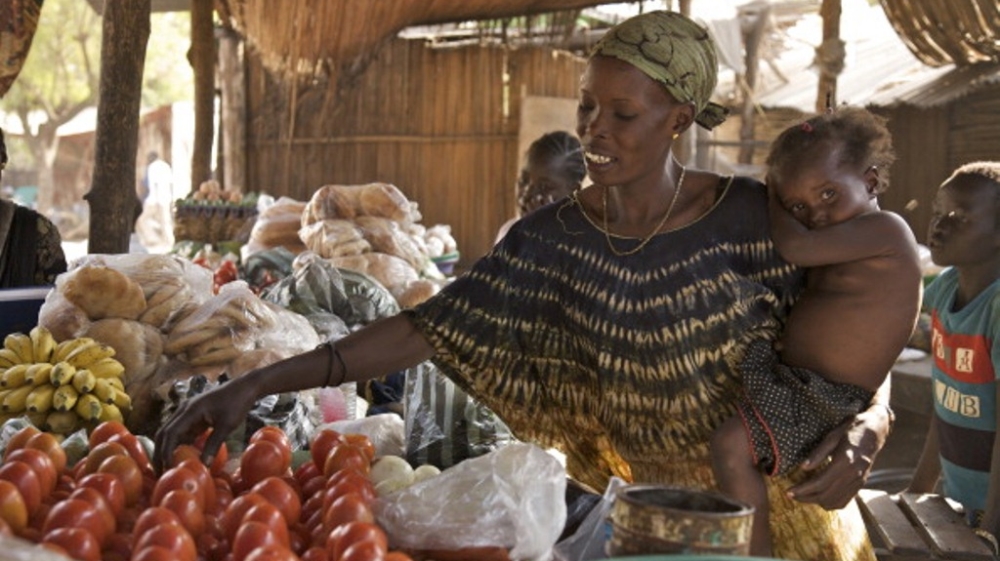 Juba, South Sudan – The capital of South Sudan lies hundreds of kilometres away from the pockets of violence and severe food insecurity that is tearing apart the world’s youngest nation. Nonetheless, Juba’s businesses are caught up in their own fight for survival.

Fula water company, one of the few manufacturing businesses operating in South Sudan, was forced to shutdown in December of last year after it could no longer cope with the deteriorating business environment.

“We were unable to access the hard currency to pay for the imports needed for our operations,” Biyar Yaak Dut, the majority owner and managing director, said as he walked through the deserted factory hall.

Only a couple of security guards are left from the 80 staff Fula once employed.

The company’s downfall highlights the crippling effect of the country’s eighteen-month conflict on the economy, which is predicted to contract by 7.5 percent this year.

A drop in oil production to an average of 160 barrels per day (bpd) from 245 bpd before the conflict, coupled with the global decline in oil prices, has left the oil-dependent government strapped for income and hard currency.

The fall in oil revenues has sent ripple effects through nascent non-oil sectors such as manufacturing. South Sudan imports almost everything from tomatoes to water bottles to – ironically – fuel.

Businesses have been caught up in a fierce battle to secure a share of the dwindling supply of petrodollars to pay for these imports.

Access to foreign exchange assets in dollars at the central bank is limited.

The scramble for dollars

A recent IMF report warned that the allocation of foreign exchange reserves has distorted the economy and fostered rent-seeking and corruption.

“Dollars are not being allocated in an efficient manner. It’s only about connections,” a manager at one of South Sudan’s biggest banks, who did not wish to be named, told Al Jazeera.

Many business owners confirmed to Al Jazeera that increased rent-seeking has made doing business nearly impossible in a country that even before the conflict began ranked fifth from the bottom on the world’s Transparency International’s corruption index due to weak institutions.

“Before there was corruption, but it was manageable. Now there is a whole chain of corruption to get a letter of credit,” the Eritrean owner of a large business, who spoke on condition of anonymity, told Al Jazeera.

Businessmen who cannot access letters of credit must turn to the black market for dollars, at more than three times the rate offered by the central bank.

In Juba’s banking district, dozens of unemployed, young men compete for customers looking to trade dollars on the black market.

“There is no better way to make money in South Sudan now,” said Deng Deng, one of the traders.

Deng returned to South Sudan from the United States following independence, and quickly turned to currency trading. “There are no jobs, so this is what people do,” he said.

Yet the bulk of the currency black market is run through well-connected companies that are able to access letters of credit.

“Instead of buying commodities and bringing them to market, businessmen sell the dollars to others for profit,” Ateny Wek, spokesperson of the President’s Office, told Al Jazeera.

The government has struggled to agree on measures to tackle the adverse effects of the parallel currency market.

“It’s a challenge. The letters of credit are necessary, the problem is that they are being abused,” said Wek.

As South Sudan gears up to celebrate its four-year independence anniversary on July 9, many marvel at how quickly the nation they once hoped could bring an end to decades of suffering descended into disarray.

“South Sudan has many resources, and we are not that many people to share that wealth,” Salah Lumeri Lumja shook his head in disappointment. Lumja used to run a mobile phone stall at Juba’s Konyo Konyo market, but was forced to close shop last month when business dried up.

At independence, South Sudan boasted a Gross National Income per capita based on purchasing power parity of $2,250, well above most East African nations.

In the five-year period leading up to independence, the country received billions of dollars in development assistance, and still ranks among the highest recipients of aid in Africa on a per capita basis.

But only a year after secession from Sudan, the oil-rich nation was hit by its first economic crisis when the government shut down oil production due to a dispute over transit fees with Sudan, which controls the only available pipeline.

The shutdown depleted the country’s foreign currency reserves and left the government stripped of 98 percent of its revenues. Oil production resumed in April 2013, but the economy barely got a breather before the current crisis erupted later that year.

In a scramble to make up for lost income, the Central Bank resorted to money printing, leaving the population at the mercy of staggering inflation rates.

Urban populations that can no longer rely on subsistence farming as a safety net have been particularly affected.

At Konyo Konyo market, a group of Ugandan shop owners sit idly by their stalls dotted with colourful buckets of beans.

“Last month, that bucket of beans went up from 160 South Sudan pound to 300,” said Abdulnasser Khamis, one of the traders. “People can’t afford to buy anything,” he added.

For now, many traders have resorted to lowering prices, hoping they can weather the storm on thin margins.

But without a lasting peace deal, South Sudan’s economy is unlikely to recover or regain the appeal it once held for foreign investors and businessmen.

“Peace must come. It is important that the transitional arrangement that will emerge pay due attention to a transparent management of the resources that South Sudan is blessed with,” said Pontara.