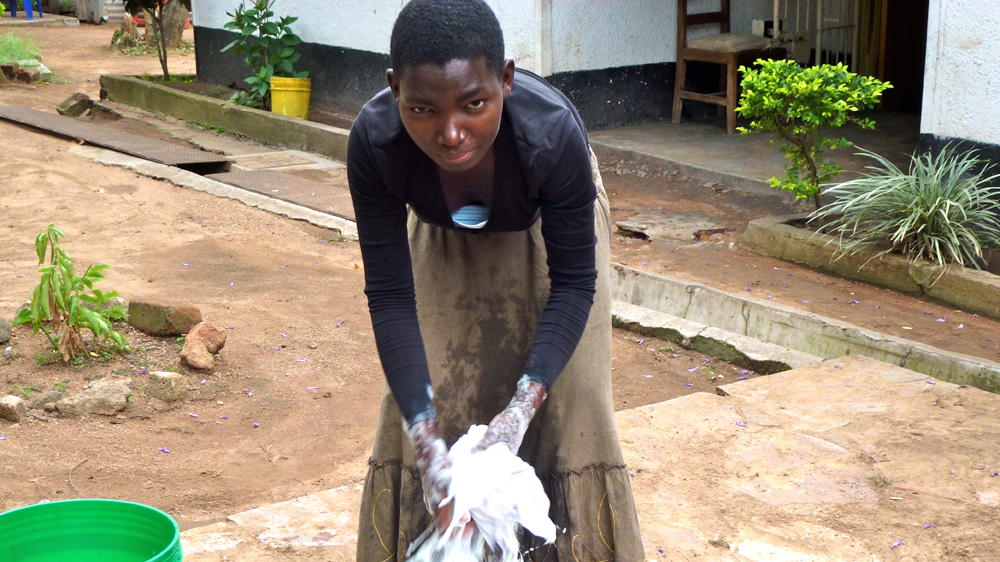 “I was supposed to be the first one awake to get the children up and send them to school, and then take care of the household chores. And then I was the last one to bed at night.”

Angel Benedicto’s account of her daily routine as a household servant in Tanzania echoes the bleak experiences of exploited domestic workers in many parts of the world, but with one further dismal detail: Even as she was expected to care for the children of the family for whom she worked, Angel was still only a child herself.

Angel was brought up by her mother along with her eight younger brothers and sisters in a village in the northern Mara region. But when she was orphaned at the age of 16 she went to the city of Mwanza on the edge of Lake Victoria in search of a job to support her siblings and soon found work in a family home.

“For the first month it was okay. I explained that I had to look after my siblings and they said they would pay me a high salary. But the work got harder and harder,” she told Al Jazeera.

Working seven days a week, Angel earned just $6.70 a month; far less than she had been promised. “I was exploited, abused and isolated. I could never rest. I was not allowed to sit at the same table to eat. I had to wait until they were finished and I would get their leftovers.”

Angel’s free time was only after her employers went to bed.

One of the luckier ones

Among child domestic workers, Angel could be considered one of the luckier ones. Often employed informally and illegally, the International Labour Organization (ILO) estimates that they number more than 17 million worldwide. The majority are girls, most are under 14, and some as young as five, and they are typically paid poorly or not at all.

“It is very easy to treat a child badly. With younger children it is easy to say ‘Do this,’ and they can’t refuse,” said Angel, now a campaigner helping others to escape from domestic servitude.

“Sometimes [in Tanzania] they want children of a young age to play with their children, but they are also expected to work. And if the parents treat them badly, then the children treat them badly as well.”

After leaving her first job, Angel found work in another household and at first things seemed better. “My employer, a wife, was nice to me and treated me as a younger sister, and the children were friendly to me,” she recalled. But when the woman started attending college in the evenings, Angel found herself the subject of unwelcome attention.

“Her husband wanted me to have sex with him. He knew I was helping my family and needed the money and he tried to use that. When I refused he started treating me badly and saying negative things about me. And then one day he chased me away and said, ‘You are not a good girl and I don’t want to see you again in my house.’”

Fortunately for Angel, by then she was already connected with Kivulini, a local organisation supporting women and girls at risk of domestic violence and exploitation. She credits the organisation with giving her the confidence and support to stand up to her abuser, and wanted to create a similar network specifically for child domestic workers.

“Many children were in the same situation as I was, but they were afraid and employers exploit that. I convinced them that we needed a voice and that nobody could speak for us but ourselves. We are the only ones who can stand up and demand our rights.”

After several years working with child workers through informal networks, she founded WoteSawa in 2012, meaning ‘All are Equal’ in Swahili, with the backing of campaign groups including Anti-Slavery International and Children Unite.

Tanzania already has laws prohibiting under-age labour, with children under 14 banned from working and older children legally allowed to work up to six hours a day. But, Angel said, abuses are often overlooked or hidden from view in a country where virtually every household employs domestic staff, and resources to investigate and prosecute complaints are scant.

She said that many children, like herself often from large low-income families, had also been pushed into domestic work by their parents, with daughters sent to work while their brothers were sent to school.
“They are sending them away without realising what happens to them,” she explained.

Sometimes too, children run away to escape from rural poverty, domestic violence, the prospect of forced marriage, or simply in the hope of making a better life for themselves in the city.

“My father ran away and my mother didn’t take care of me,” said Ester, not her real name. “I went to primary school and passed the exam for secondary school but there was no money for fees so I had to stay at home. I decided to go to town to work to pay for my schooling, but now I’m supporting my sisters and I’ve missed the opportunity.”

International efforts led by the ILO and NGOs to press governments to adopt more robust laws have also made only halting progress since the ILO, the UN agency for global labour standards, adopted a widely supported convention in 2011 setting out basic rights for domestic workers, including children. Four years later, only 21 countries have ratified and implemented those standards.

“Those countries who voted in favour of the convention on decent work for domestic workers should confirm their commitment and ratify the convention, as well as adjusting their domestic legislation,” Silvia Cormaci, women and girls programme coordinator at Anti-Slavery International, told Al Jazeera.

“Domestic workers, especially women migrants and girls below 18, are highly vulnerable to abuse and exploitation ranging from humiliation, verbal and sexual abuse to denial of basic labour rights such as reasonable working hours and rest periods, decent wages, leave, and in the worst cases, restriction of movement, torture and slavery-like living and working conditions.”

In Tanzania at least, WoteSawa is gradually improving the lives of those it reaches. Angel said that awareness-raising initiatives meant that many community leaders and police were now taking issues concerning child domestic workers more seriously, and even bringing cases to the organisation’s attention.
Now in her mid-20s, she finds herself leading an organisation that has recruited and trained an advocacy network of hundreds of former and current child workers to spread its message and offer support and mentoring to those in need.

In one recent legal case, WoteSawa helped a 16-year-old housemaid to bring a successful gang rape complaint against her former employer who was jailed for life.

“My parents sent me to work because we lived in extreme poverty but I ended up being sexually exploited and abused,” said Magreth, not her real name. “I didn’t see the meaning of life until WoteSawa rescued me and I thank them for the counselling and support I have received.”

Other children have received entrepreneurship training and small grants to help them start their own businesses, with some setting up shops and stalls and others learning tailoring and catering skills.
“We are training them in their rights and working to ensure that justice is there for every child,” said Angel. “We teach them not to be afraid and to know that just because you are a domestic worker it doesn’t mean you were born to be treated badly.”

Having once lived on scraps of food discarded from a family dinner table, Angel was a guest of the British royal family in London last week where she is set to collect a Queen’s Young Leaders award recognising her work on behalf of child domestic workers.

Cormaci said that Western countries such as the UK, one of a small number of ILO members which did not vote in favour of better protection for domestic workers in 2011, needed to step-up and support more robust international standards. And, she added, WoteSawa could be an inspiration for others fighting for their rights elsewhere in the world.

“What Angel managed to achieve starting from conditions of poverty and exploitation is truly inspiring,” Cormaci said.

“It gives hope to girls and women who are trapped in similar situations of exploitation and slavery. I hope her example can be followed in many other countries as the conditions children face in domestic work are quite universal.”

Tanzania did vote in support of the ILO’s convention on domestic workers, and Gaudentia Kabaka, the country’s labour minister said last month that the government planned to introduce legislation in the current parliament to ratify the convention. But with elections scheduled for later this year, time appears to be running out.

For now, the children of WoteSawa are learning to help themselves.

“We have a former child domestic worker who has graduated in early childhood education. She is now taking a diploma and we are sure will become a school teacher,” said Angel.

“We are empowering them to live independent lives and they are already escaping exploitation.”

The post In pursuit of child rights in Tanzania appeared first on African Media Agency.