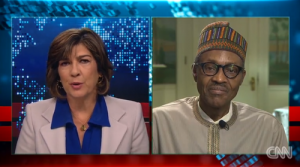 During an interview on Tuesday with CNN’s Christiane Amanpour, President Muhammadu Buhari of Nigeria said that his administration would be willing to negotiate with Boko Haram if it meant returning the 219 Chibok schoolgirls from captivity. The girls were captured by the militant group in northeastern Nigeria in April 2014. “If we are convinced that the [Boko Haram] leadership… can deliver those girls we would be prepared to negotiate what they want,” President Buhari told the CNN host during an interview on his official visit to the US. President Buhari also said that the US had agreed to help the Nigerian military in the fight against Boko Haram, and that he had asked for assistance in training, equipment, and intelligence. https://www.youtube.com/watch?v=VwsIiaLZb-w&feature=player_detailpage#t=3   Ms. Amanpour asked President Buhari about his approach to security issues, given reports (one from Amnesty International) of rampant human rights abuses by the Nigerian military. He responded with his progress in preparing a task force and his recent replacement of the military chiefs. “I think I can be held to my promises for the next three and three quarter years ahead of me,” the Nigerian leader said. “I think twelve weeks also is too early for anyone to pass judgment on my campaign promises.” *Source Sahara Reporters]]>