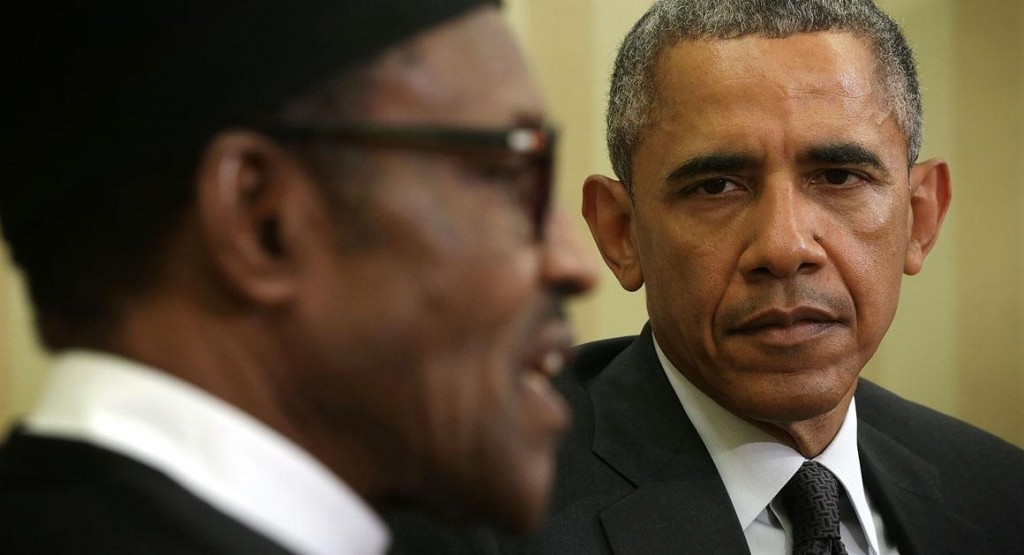 WASHINGTON, DC – JULY 20: (AFP OUT) U.S. President Barack Obama (R) listens as Nigerian President Muhammadu Buhari (L) speaks during a meeting in the Oval Office of the White House July 20, 2015 in Washington, DC. The two leaders were expected to discuss various topics including the fight against the Boko Haram terrorist group. (Photo by Alex Wong/Getty Images)[/caption] Beneath the ecstatic welcome President Barack Obama will receive when he arrives in his father’s homeland of Kenya on Friday is a lingering sense of disappointment. More than the first black president, he’s the first African-American U.S. president, and that’s accentuated a frustration among many Africans — and some Americans — who see his record on the continent over the last six-and-a-half years as modest at best and falling short of the successes of his predecessor,George W. Bush.

“There’s been a feeling that up to now, maybe he hasn’t really achieved all the expectations,” said Witney Schneidman, who’s done extensive governmental, non-profit and corporate work in Africa and co-chaired the Africa Experts Group for Obama’s 2008 campaign.

Though he thinks the assessment is unfair, Schneidman said the sense of disappointment in Obama himself has fed into what many Africa watchers say is a sense of abandonment: “The general view of the U.S. in Africa is: ‘Where is the U.S.? We see China. We see India.’ There’s a desire to see more of the U.S. on the continent.” Africa’s a continent where politics is all about patronage, and a president of the United States with Kenyan roots seemed to many Africans like the ultimate political patron. But because of American economic and security interests, other regions of the world have taken precedence during Obama’s time in office. Obama’s top foreign-policy initiatives have focused on Asia, the Middle East, and, lately, Europe. He left saving Mali to the French, he focused on Ukraine and Iran even as South Sudan, a country born on his watch with his administration’s support, fell further and further apart and Burundi became the type of unraveling mess no one can quite explain. Even if not for the heightened expectations, Obama would likely come up short compared to Bush on Africa. Bush’s investment in combating AIDS and malaria in Africa was transformative, saving millions of lives and changing many millions more. The reverberations have accelerated all sorts of other changes in the society and economy across the continent: people who would otherwise have been dead became productive citizens and parents. Even some Obama loyalists acknowledge he’s fallen short on Africa — grudgingly admitting via backhanded compliment that the continent is the one place in the world where Bush was strong, while they focused on cleaning up after him everywhere else. “Given the state of affairs that the president inherited both at home and around the world, the U.S. relationship with Africa was a priority that was not in need of urgent attention,” a senior administration official said ahead of the trip. Obama’s record on Africa is a mix of public-private partnerships, conversations that culminated in last year’s African Leaders Summit in Washington and what aides repeatedly point out is now a record-setting four trips to the continent. (Bush only made two, but the White House is also counting the not even 24 hours on the ground Obama spent in South Africa to speak at Nelson Mandela’s funeral toward his total.) And though Ebola faded as an issue in the United States as soon as the panic passed, Obama aides point to the continued investment that helped prevent a pandemic. Nonetheless, Obama’s done nothing overwhelming or unique with aid. He’s got no signature program. But Obama’s collection of smaller Africa accomplishments, many experts inside and outside the administration say, adds up to more than Bush’s bigger accomplishments, even if they don’t get credit for it. “When all’s said and done, between the Young African Leaders Initiative, Power Africa, Trade Africa and Feed the Future, Obama could be as transformative, if not more so, than Bush,” Schneidman said. Susan Rice, who served as the undersecretary for African Affairs at the State Department during Bill Clinton’s second term and is now Obama’s national security adviser, pushed back at the comparisons on Wednesday at the White House, speaking ahead of the trip. “I think President Obama’s record on Africa will not only match that of his predecessors, but I predict will exceed it,” Rice said. Still, on the streets and among African leaders, there’s deep frustration. “Africans had in general an utterly unrealistic sense of what it meant for the American president to be of African-American descent,” said John Campbell, a former ambassador to Nigeria under Bush who’s now at the Council on Foreign Relations. “That the president had a Kenyan father, many Africans seemed to think he was somehow going to be their president. When lo and behold he remained the president of the United States, they were disappointed. That’s more of an Africa problem than an Obama problem.” “It’s filtered through how Kenyans view their own politics: ‘If we get our guy into power, it’ll be our turn to eat,’” said Matt Carotenuto, the co-author of the upcoming book, “Obama and Kenya: Contested Histories and the Politics of Belonging.” “There’s a bit of a disappointment, although there’s a sort of celebrity fascination and hope that this visit will have some kind of tangible impact.” Some Obama aides and loyalists acknowledge a domestic political reality that’s also held him back: the first black president needed to avoid looking like he was putting his thumb on the scale for Africa. “Within Africa, the feeling I get is that he’s a bit hamstrung. The minute he does anything for an African country that he wouldn’t do for a Pacific or Caribbean country, people are going to start shouting,” said Guy Scott, a former vice president of Zambia who briefly served as acting president last year, and is still a member of Parliament. There’s still a lot of admiration for Bush and a sense of how deep a connection he developed, but the connection to Obama himself remains intense among Africans, even as some have a sense of the political and legislative limitations he faces. “The feeling I get from people I’ve spoken to is: Obama’s one of us,” Scott said. “Most people call him an American African instead of an African-American.” [caption id="attachment_19516" align="alignright" width="586"] 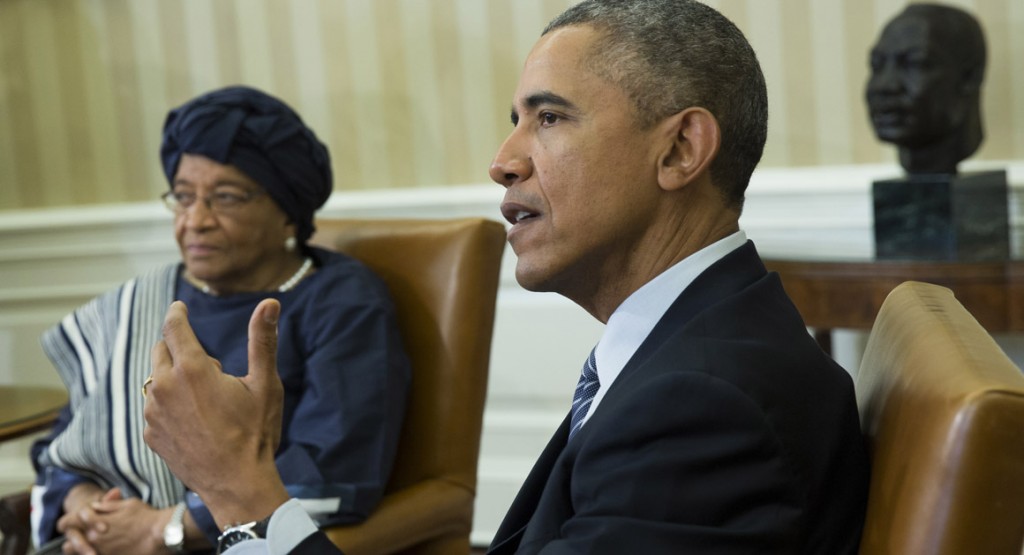 President Barack Obama meets with Liberian President Ellen Johnson Sirleaf in the Oval Office of the White House in Washington, Friday, Feb. 27, 2015, to discuss the ongoing response to the Ebola outbreak in Western Africa and Liberia’s recovery from the deadly virus. (AP Photo/Evan Vucci)[/caption]

The Bush-Obama Africa comparison isn’t as simple as putting a list of their investments and priorities side by side. Africa’s a much different place than in the Bush years, with new concerns about counterterrorism and population growth, and a more aggressive identity — these days, many Africans want to be seen as collaborators in solving African problems and partners on the global stage, not supplicants dependent on benevolent foreigners to lead them. Obama will be the first American president to address the African Union as part of the second stop of this trip in Addis Ababa, and the first sitting American president to go to Ethiopia at all—the African Union didn’t even exist until two years into Bush’s presidency.

That, the White House argues, helps explain why Obama hasn’t done more to stop the years of killings in South Sudan that Rice said the United States was “deeply disappointed” in, and makes her personally “heartbroken.” Getting approval, from Congress or from the public, for sending troops into another foreign country where Islam is an issue would be a stretch even if he wanted to. And it’s not clear that other countries in Africa would welcome that kind of force or other security intervention. Obama’s going to have to spend what may be his last trip to Africa less on securing a legacy than laying the groundwork for America’s relationship with the continent for long after he’s out of office. That’s when he’ll be able to return and make a visit to his family village and father’s grave without the entourage he’d clearly like to be able to ditch on this trip. “We’re going to need to rethink how we think about American effectiveness in Africa,” said William Bellamy, a former ambassador to Kenya under Bush. “Our relative power is different than it was 10 years ago. African needs are different than they were 10 years ago. The days when the U.S. could come in and call shots in this or that corner of the continent are numbered.” But now in the final stretch of his presidency, Obama at least is ready to openly and publicly talk about his own connection. “This is my fourth visit to sub-Saharan Africa, more than any other U.S. President,” Obama said Wednesday evening at the White House, at a pre-trip reception to celebrate the renewal of the African Growth and Opportunities Act, “which, if your name is Barack Obama, I guess that makes sense.”