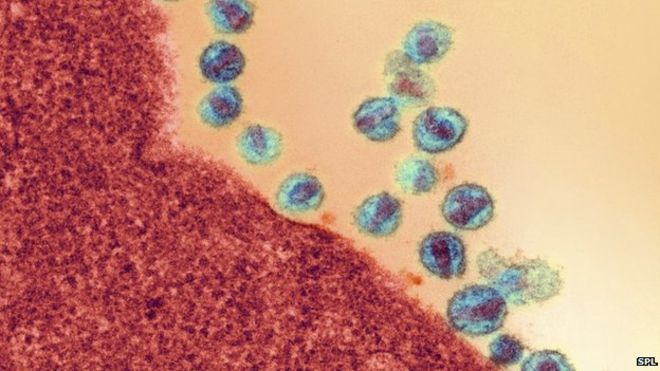 HIV can be flushed out of its hiding places in the body using a cancer drug, researchers show.

The cornerstone of treatment, anti-retroviral therapy, kills the virus in the bloodstream but leaves “HIV reservoirs” untouched. The study, published in PLoS Pathogens, showed the drug was “highly potent” at reactivating hidden HIV. Experts said the findings were interesting, but it was important to know if the drug was safe in patients. The power of the HIV reservoir was shown with the case of the Mississippi baby. She was given antiretroviral drugs at birth. Despite appearing to be free of HIV for nearly two years after stopping treatment, she was found to be harbouring the virus.

A strategy known as “kick and kill” is thought to be key to curing HIV – the kick would wake up the dormant HIV allowing the drugs to kill it. The team at the UC Davis School of Medicine investigated PEP005 – one of the ingredients in a treatment to prevent cancer in sun-damaged skin. They tested the drug in cells grown in the laboratory and in parts of the immune system taken from 13 people with HIV. The report said “PEP005 is highly potent in reactivating latent HIV” and that the chemical represents “a new group of lead compounds for combating HIV”. One of the researchers, Dr Satya Dandekar, said: “We are excited to have identified an outstanding candidate for HIV reactivation and eradication that is already approved and is being used in patients. “This molecule has great potential to advance into translational and clinical studies.” However, the drug has still not been tested in people who are HIV-positive. Prof Sharon Lewin, from the University of Melbourne, said the results were “interesting” and marked an “important advance in finding new compounds that can activate latent HIV”. She told the BBC: “This study adds another family of drugs to test to potentially eliminate long-lived forms of HIV although much more work needs to be done to see if this works in patients. “Although PEP005 is part of an FDA approved drug, it will first take some time to work out if it is safe to use in the setting of HIV.” *Source BBC  ]]>