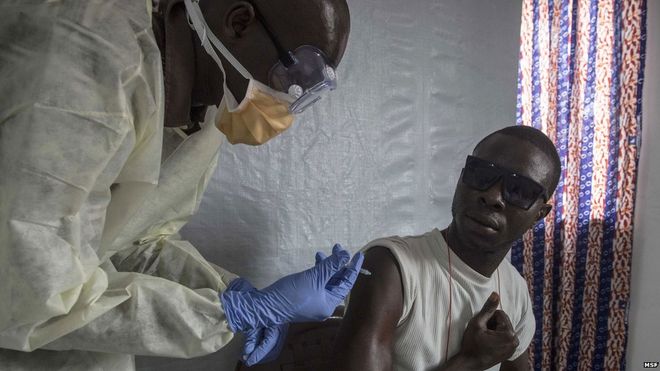 A vaccine against the deadly Ebola virus has led to 100% protection and could transform the way Ebola is tackled, preliminary results suggest.

There were no proven drugs or vaccines against the virus at the start of the largest outbreak of Ebola in history, which began in Guinea in December 2013. The World Health Organization (WHO) said the findings, being published in the Lancet, could be a “game-changer”. Experts said the results were “remarkable”. This trial centred on the VSV-EBOV vaccine, which was started by the Public Health Agency of Canada and then developed by the pharmaceutical company Merck. It combined a fragment of the Ebola virus with another safer virus in order to train the immune system to beat Ebola. A unique clinical trial took place in Guinea. When a patient was discovered, their friends, neighbours and family were vaccinated to create a “protective ring” of immunity. Analysis This could be the breakthrough the world has been waiting for. There is caution as the results are still preliminary, with more data coming in. But officials at the WHO believe the effectiveness of the vaccine will end up being between 75% and 100%. If such a vaccine was available 18 months ago then thousands of lives could have been saved. There are still other vaccines being trialled – notably from GSK and Johnson&Johnson – although as the number of cases continues to fall it is becoming increasingly difficult to prove how effective they are. Ebola will inevitably come again. The hope now is that the legacy of this unprecedented outbreak will be a vaccine that means a tragedy of this scale can never be repeated. One hundred patients were identified in the trial between April and July and then close contacts were either vaccinated immediately, or three weeks later. In the 2,014 close contacts who were vaccinated immediately there were no subsequent cases of Ebola. In those vaccinated later there were 16 cases, according to the results published in the Lancet medical journal.

The WHO says it is so far 100% effective, although that figure may change as more data is collected. Close contacts of Ebola patients in Guinea will now be vaccinated immediately. And since the vaccine has been shown to be safe, that process will also be extended to include children. Médecins sans Frontières (MSF) is involved with this research, and is part of a parallel trial for frontline healthcare workers. Medical director Bertrand Draguez said the Lancet results should spur instant action. “With such high efficacy, all affected countries should immediately start and multiply ring vaccinations to break chains of transmission and vaccinate all frontline workers to protect them.” Marie-Paule Kieny, an assistant director general at the WHO told BBC News: “It is certainly promising. We have seen that where rings have been vaccinated, the transmission has stopped. “Prior to vaccination there were cases, cases, cases. The vaccine arrives and 10 days later the cases are flat. “It could be a game-changer because previously there was nothing, despite the disease being identified 40 years ago. “When there is a new outbreak this vaccine will be put to use to stop the outbreak as soon as possible to not have the terrible disaster we have now.” More than 11,000 people have died from Ebola and nearly 28,000 have been infected. The sheer scale of the 2014-15 outbreak led to an unprecedented push on vaccines – and a decade’s work has been condensed into around 10 months. The number of cases has fallen – and in the week up to July 26th 2015 there were just four cases in Guinea and three in Sierra Leone. Prof John Edmunds, from the London School of Hygiene & Tropical Medicine, helped design the trial: “The development has been at an absolutely unprecedented speed. “This is very good news, these are very significant results, the epidemic is not over and this shows we have another potential weapon. “The trial is still continuing, these are interim results which need confirming, but there’s now light at the end of the tunnel.” Dr Jeremy Farrar, the director of the Wellcome Trust medical charity, said this was a “remarkable result” and was the product of international collaboration. He added: “Our hope is that this vaccine will now help bring this epidemic to an end and be available for the inevitable future Ebola epidemics.” *Source BBC  ]]>
0