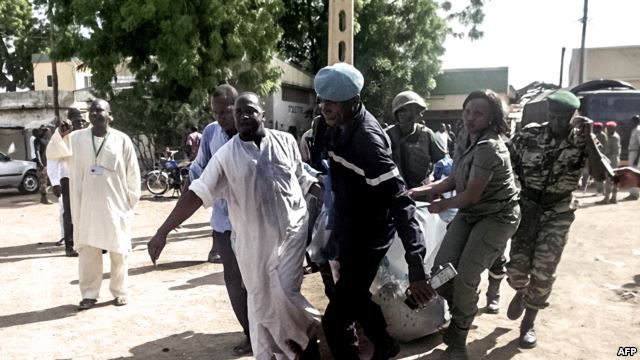 Security forces use a blanket to transport the remains of some of the 11 victims of a double blast in the northern Cameroonian city of Maroua, July 22, 2015.[/caption] Security has been increased in northern Cameroon following Wednesday’s double suicide bombing attack, carried out by two females, that left dozens dead. The attack in the city of Maroua is the fourth in two weeks. Governor Midjiyawa Bakari of the country’s Far North region said he has asked the military to be more vigilant and vigorous while checking travelers and their goods, adding that all suspected markets, shops, bars and popular spots have been sealed. Bakari said President Paul Biya instructed him to seal parts of Cameroon’s borders with Nigeria that are suspected to be used by Boko Haram suicide bombers and fighters. Less than two weeks ago, Bakari banned women from wearing burka veils after female suicide bombers used them to conceal explosives in Fotokol,  Cameroon, which borders Nigeria’s Borno state, a former stronghold of the Boko Haram insurgent group. Wednesday’s attack was carried out by one female disguised as a merchant and the other, a 9-year-old girl, disguised as a beggar. Bakari said they found several wounded people in the market Thursday morning. He said victims, many suffering fractures and amputations, were taken to several hospitals. Bakari also asked all doctors and medical staff under his administrative area to attend to the victims and stay at their job sites. Earlier this year, the Nigerian-based Boko Haram announced its allegiance to the radical Islamic State group. *Source VOA]]>