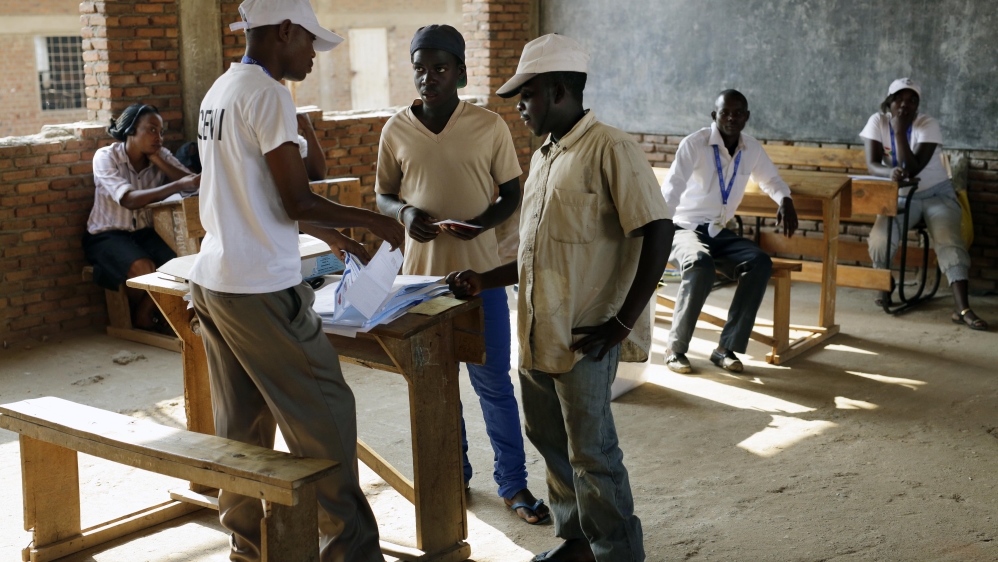 Burundi’s leading opposition politician has called on President Pierre Nkurunziza to hold talks with rivals and form a national unity government after this week’s election, saying it could help avert a new civil war.

Agathon Rwasa, a former rebel leader like Nkurunziza in Burundi’s civil war, told the Reuters news agency on Wednesday that there was an urgent need to prevent generals behind a failed coup in May taking up arms in the crisis sparked by the incumbent’s bid for a third term in office.

“Some have already been waving the threat of armed struggle,” he said.

“For the sake of Burundi, the idea of a government of national unity can be accepted,” he said, adding his demands also included new elections, possibly in a year.

Reacting to the call from the opposition, a presidential official told Reuters that Nkurunziza would not oppose forming a national unity government in the event of him winning the election.

“A government of national unity is not a problem for Pierre Nkurunziza, we are ready to do so,” Willy Nyamitwe, adviser to the president said.

But he rejected the idea of cutting short any new five-year mandate as “impossible”.

Vote counting is under way and results are expected on Thursday in election boycotted by the opposition and civil society groups over fears of electoral fraud.

The US said the election will not be credible as it has been tainted by the government’s harassment of opposition and civic groups, closing down of media outlets and intimidation of voters.

Nkurunziza is widely expected to win a third consecutive term.

Shortly before voting started on Tuesday, a policeman and a civilian were killed amid a string of explosions and gunfire in the capital Bujumbura, the epicentre of three months of anti-government protests.

Al Jazeera’s Haru Mutasa, reporting from Bujumbura, said that one member of the opposition was also killed overnight in the city’s Nyakabiga neighbourhood. The incident prompted a big crowd to gather there in protest in the morning.

The opposition have denounced the candidacy of the incumbent president as unconstitutional and a violation of the 2006 peace deal that ended a dozen years of civil war and ethnic massacres in 2006.

The nation’s constitutional court has ruled in the president’s favour.

RELATED: Burundi’s Nkurunziza: ‘It’s either me or al-Shabab’

More than 100 people have died in protests since the ruling party announced in April that Nkurunziza would run for a third term.

Independent media has been shut down and many opponents have fled – joining an exodus of more than 150,000 Burundians who fear their country may again be engulfed by widespread violence.

“The government has opted to isolate itself and go ahead with pseudo-elections,” said Leonce Ngendakumana, a prominent opposition figure, after talks collapsed.

“They have refused to save Burundi from sliding into an abyss,” said Jean Minani, another opposition figure.

Analysts say renewed conflict in the country could reignite ethnic Hutu-Tutsi violence and bring another humanitarian disaster on the region.

The conflict also risks drawing in neighbouring states – much like in the war-torn east of the Democratic Republic of Congo.