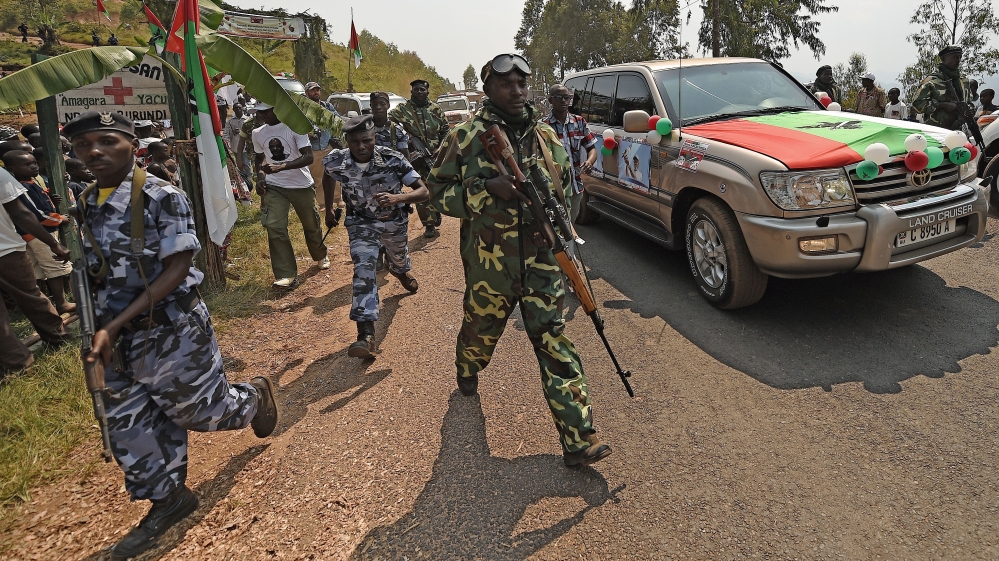 Burundi’s President Pierre Nkurunziza has stepped up his campaign for a third term in office, holding a rally north of the capital Bujumbura in one of the last major events before Tuesday’s election.

Nkurunziza campaigned in Kabarore on Friday, vowing that next week’s election will go ahead despite threats of an opposition boycott and violence from members of the military involved in a failed coup.

For the past few days, there has been speculation that the election will be postponed, but the president told his supporters “that this will happen as planned and he is going to win,” Al Jazeera’s Haru Mutasa, reporting from Kabarore, said.

“That’s bad news for opposition members who believe that that election will not be free or fair,” our correspondent said.

“They say that they have been intimidated and not allowed to campaign in the past several weeks. They don’t want this election to go ahead.”

The news comes as negotiations between the ruling party, the opposition, and civil society and religious leaders continue in the capital Bujumbura.

Our correspondent said there were reports that a coalition government or a power-sharing arrangement was being considered.

“There’s lots of talks about a unity government after the election. The question is, who will make up this government?”

Burundi’s crisis began in late April when Nkurunziza announced his intention to stand for a third consecutive five-year term, despite a constitutional two-term limit, sparking months of turmoil and an attempted coup in mid-May.

Scores have been killed in months of protests, with more than 158,000 refugees fleeing to neighbouring countries, according to the UN.

On Thursday, two protesters opposed to Nkurunziza’s bid were wounded when police opened fire at a demonstration in Bujumbura, witnesses told the AFP news agency.

The protesters had verbally clashed with supporters of the president.

Grenade explosions have also hit the capital again in recent nights, as has been common over the past weeks.

Burundian military sources also reported fresh clashes with rebels in a forested area in the north of the country and near the border with Rwanda.

Nkurunziza’s ruling party scored a widely-expected landslide win in parliamentary polls held on May 29, but these were boycotted by the opposition and condemned internationally as neither free nor fair.

The post Burundi leader says poll is on despite threats appeared first on African Media Agency.