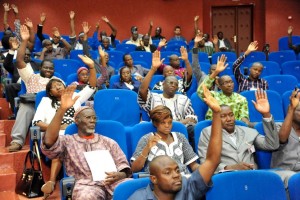 Members of Burkina Faso’s interim parliament raise their hands on July 16, 2015 in Ouagadougou as they vote on a resolution asking the High Court to put deposed leader Blaise Compaore on trial for “high treason” and violating the constitution (AFP Photo/Ahmed Ouoba)[/caption]

The resolution was approved by 60 out the 63 MPs present, an AFP reporter saw. Three lawmakers abstained from the vote.

Burkina Faso has been run by transitional authorities since Compaore fled the country last year after his plans to extend his 27-year rule sparked a popular uprising.

Thursday’s resolution accuses Compaore of seeking to modify the constitution “with the aim of curbing the process of democratic change” in Burkina Faso.

It calls for the 64-year-old to be “referred to the High Court of Justice to answer the allegations of high treason and violation of the constitution”.

The lawmakers also accused former premier Luc Adolphe Tiao and his government of “intentional assault, murder and complicity in assault and murder”.

Compaore, who came to power in a coup in 1987, sparked mass anger when he announced his intention to change the constitution so he could stand for a third term in 2015, prompting hundreds of thousands to take to the streets in violent protests.

On October 31, Compaore stepped down and took refuge in Ivory Coast.

The military briefly took control of the landlocked nation of 17 million people before handing over to a transitional government, due to stay in place until presidential and legislative elections are held on October 11.

But Burkina Faso’s temporary authorities have faced challenges from the Presidential Security Regiment (RSP), a 1,300-strong elite unit in the army once considered Compaore’s right-hand men. 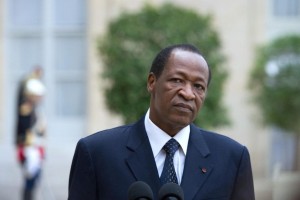 On Thursday, President Michel Kafando sought to end a months-long conflict between the RSP and Prime Minister Isaac Zida, saying he would keep the premier in place in the run up to the elections but remove him from his secondary role as defence minister.

In a broadcast on radio and television, the president said that “any upheaval at this level would only disturb proper preparations for elections with the major risk of extending delays” to the vote.

He further accused the army of disturbing the transition of power to an elected administration.

The news came after a regional West African court on Monday annulled a new electoral law that sought to bar several political parties and individuals linked to Compaore from contesting the October 11 polls.

The Economic Community of West African States (ECOWAS) Community Court of Justice ruled the change constituted “a violation of the rights” to freely participate in elections.

Kafando said Burkina Faso, “as a civilised nation”, would respect the decision.

Burkina’s High Court, which was set up in 1995, has the jurisdiction to try the president and government officials for serious crimes committed while in power.