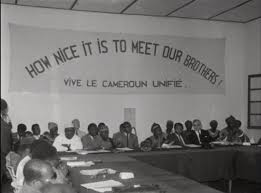 I was surprised but not shocked that the question on Federalism was not asked by journalists during the Press conference President Paul Biya jointly hosted with the visiting French President, Francois Hollande at the Unity Palace on July 3 2015. Yet for close to three months successively the media have been awash with headline stories about the All Anglophone Lawyers’

Declaration on federalism, the South West Chiefs’ Conference’s unprecedented stance on Anglophone marginalization, the South West Elite Association’s reiterated stand on federalism, the pro-federalist utterances by francophone intellectuals like Prof. Mathias Eric Owona Nguini, Noucti Tchokwago and Prof. Maurice Kamto, Christian Cardinal Tumi’s interview in which he stated categorically that “if Anglophones are given another Referendum, they would rather leave Cameroon”,Ben Muna’s clarion call for another Referendum to determine the Southern Cameroon’s new option, Honourable Cyprian Awudu Mbaya’s crusade against the lopsided policies of bilingualism in Cameroon, and behold the petition signed by fifty Anglophone lawmakers and addressed to President Paul Biya over the ‘boko haramisation’ of the constitutional status of English language and Anglophones in the country.

All of these Declarations and petitions had occupied conspicuous and prime time space in the media sphere before President Francois Hollande’s whistle stop tour to Cameroon thereby making the federalism narrative or the quest for it a National discourse needing penultimate National attention. The federalism debate needed the same if not more attention as or than the2018 Presidential elections or the knee-jerk and influence-peddling considerations of a possible release by Presidential clemency of the Franco-Cameroonian Kondengui jailbird Barrister Lydienne Eyoum.

That the federalism question was not on any journalist’s lips on a day that millions of viewers were watching a rare Biya “off the cuff and face-to-face” question time speaks volumes of the levity with which the Southern Cameroonian plight is being treated, the nonchalance with which mere Declarations and lip-deep petitions are regarded and above all the tendency for local and global policy makers to place peaceful constitutional engineering approaches over cultural liberty and liberal peace systems.

Yet the incremental swelling of the federalism abscess since 9 May 2015 is clinical enough for any conscious and sensitive duty bearer to incise it to the sunlight of debate. But before that debate is done the various Declarations and petitions by Anglophones should resonate with what is the real Anglophone problem. The Anglophone problem is rooted in the Plebiscite question of 11th February 1961 “Do you wish to achieve INDEPENDENCE by joining the Republic of Cameroon or by joining the Republic of Nigeria?”

In this regard the Anglophone problem stems from the 20 May 1972 Referendum that abolished the INDEPENDENCE of a territory that conceded some of its Independence under a Federation. It is the restoration of that Independence through federalism that Anglophones have been highlighting for the last three months. Anglophones did not vote on 11th February 1961 or achieve Independence and Reunification on 1st October 1961 to become Ministers of Finance, Ministers of Defence or any of the so called power-centred Ministers that have so far eluded Anglophone occupation. Indeed Anglophones were already heading Ministries of Finance, Defence, Education and Interior albeit as Secretaries of State in their West Cameroon statehood under a functional and not a decorative Prime Minister.

Therefore to equate the Anglophone problem to a search for Anglophone presence in Ministries of influence and affluence is either merely a ploy by position-posturing and rent-seeking Anglophone power mongers to accede to power or simply an ahistorical machination by a regrettable bunch of reductionist theorists to nuance the law of causality, the luxury of memory and the libido of history. And this is just the moderate interpretation of the Anglophone problem which in its extremist ideology rubbishes the existence of a Union for that matter.

Be that as it may, the recent rise in tempo and unanimity on Anglophone discontent speaks to the fact that even a quiet voice can ignite a Revolution even if that revolution is being echoed at least for now through expanded nonviolent action “the force of argument”. Nonviolent action believes in changing the opponent’s behavior by changing his or her heart and by shaping forces that constitute his or her context. This is the time for the leadership in Cameroon to religiously record the twitter feels of Anglophone advocacy groups, to meticulously take the soundings of the restive Anglophone community and to judiciously engage the Anglophones in another Foumban, another Referendum and in another Federalism.

The Anglophone problem goes beyond identity relations, communal grievances and governance structure. It is founded first and foremost on a constitutional redress. Politics is not only about power acquisition and maintenance; it is about opening all vistas for front-channel or back-channel communication with the people. It took thirty years of blood letting for a constitutional referendum to be held in Ethiopia so Eritreans can decide their fate. Because Eritreans opted to secede from Ethiopia in 1993, the Constitutional Assembly in Ethiopia came out on November 22 1994 with a provision which enshrines the right of any kilil (region) to secede as long as 61% of the members of the Regional Assembly concerned agreed.

It took fifty years of bush fighting between South Sudan and Sudan with millions of lives lost before they could both sign a Comprehensive Peace Agreement and proceed to a Referendum on 9th July 2011. History is replete with how issues ranging from the social (same sex marriages), political (Quebec, Scotland) and economics (Greek bail out) have been peacefully resolved through referendums. What therefore explains this disconnect between the legitimate aspirations of Anglophone community in Cameroon and the national leadership especially at a time and season like this when we do not need an upsurge of internal dissent to further compound the illegal aggression of an external spoiler.

As a student of peace and conflict studies as well as a civil society actor, my take is that Anglophones need to know that the realization of a Project proposal is based on the triangle of an evidence-based Rationale (Memorandums, Petitions, and Declarations), demand-driven Activities ( protest campaigns, Constitutional conferences, and Referendums) and consensus-inspired Implementation ( new constitutional frameworks). So far and for close to fifty years today Anglophones have exhausted and are still outsmarting themselves in the production of evidence-based Rationale. And that is merely the first step in the long triangular journey of Implementation.

Ox Delivers: An Interview With One of AFSIC’s many Success Stories