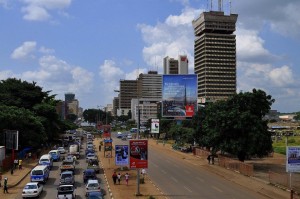 The Board of Directors of the African Development Bank (AfDB) Group on June 24, 2015 approved a loan of US $50 million to finance the Lusaka Sanitation Program targeted at Lusaka, the capital city of Zambia. The Executive Directors, in approving the loan, expressed their satisfaction with the innovative approach in addressing the challenges of sanitation particularly among the poor in informal settlements. They urged the African Development Bank’s Water and Sanitation Department to capture the lessons and share them with other regional member countries. The program will deliver improved public health by improving access to climate-resilient sanitation and hygiene services to the peri-urban areas where the majority of the urban poor reside and also strengthen Lusaka Water and Sewerage Company’s management, institutional capacity and sustainability of sanitation services, the agency to implement the program. With over 600,000 beneficiaries in the capital city, of whom 52% are women, the program will address a crisis in sanitation that is costing Zambia 1.3% of its GDP per year. Lusaka, with its high urbanisation rate, is the region hardest hit by poor sanitation with annual outbreaks of water-borne diseases. Speaking after the Board’s approval of the program, Mohamed El Azizi, Director for the Bank’s Water and Sanitation Department, said, “The economic burden of inadequate sanitation falls most heavily on the poor who are most likely to have inadequate sanitation facilities. Therefore, the Bank’s intervention will result in residents gaining better health from improved environmental and sanitary conditions; especially those in peri-urban areas where most of the urban poor are residing”. He added that special focus will be given to vulnerable households within the project area. To ensure sustainability of the intervention, the program brings together key stakeholders and actors in the implementation of activities including the Lusaka City Council, Ministry of Health, Ministry of Education, Ministry of Local Government, development partners and various non-governmental organizations already involved in sanitation provision in the project area. In addition, as part of the program to ensure sustainability of the proposed infrastructure, training and capacity building of Lusaka Water and Sewerage Company personnel has been incorporated to better operate and maintain the expanding sewerage infrastructure. El Azizi, emphasized that “This program addresses the broader questions of inclusiveness and equity and is a clear demonstration that the Bank has continued to focus on supporting the unserved population to increase access to equitable, sustainable and improved sanitation, and it will contribute to both poverty alleviation and more inclusive growth outcomes for poor Zambians”. The program will use $39 million for sewerage improvements, specifically to upgrade and expand sewerage systems in the peri-urban areas of Matero, Chelstone, and Chunga. The program will also spend $9 million on decentralised sanitation facilities, fecal sludge management infrastructure and service providers, and sanitation and hygiene promotion. The program is being supported by three other development partners (World Bank, European Investment Bank and Kreditanstalt fur Wiederaufbank (KfW)) and is one the first step towards implementing the Lusaka Sanitation Master Plan that aims for 100 percent sanitation coverage for Lusaka Province by 2035. African Development Bank support to the program is expected start in late 2015 with a duration of five years. *AFDB]]>