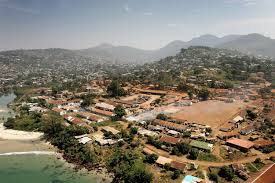 This week saw the weekly confirmed Ebola case count in Sierra Leone reaching a two-month high of 16 cases, up from only two a month ago. Each day, thousands of travelers cross the international border between Kambia in Sierra Leone and Forecariah in Guinea. This corridor between the capital cities of Freetown and Conakry remains a major hotspot area despite significant humanitarian interventions. The new caseload has seen the President of Sierra Leone declare a 21-day surge known as Operation Northern Push in Kambia and Port Loko with a strictly enforced 6am-6pm curfew and travel ban in place in a concerted effort to get to zero new cases by early July. Over the past three weeks, IOM Sierra Leone has activated Phase II of its Health and Humanitarian Border Management (HHBM) project in Kambia District by providing 100 per cent monitoring of the entry/exit health screening process at the Category A (permanently manned, infrastructure in place) international border crossing with Guinea at Gbalamuya with the deployment of 25 IOM monitors that are in operation in 8 hour shifts 24 hours per day, 7 days per week. Phase I of the project focused on supporting the establishment of a robust health screening process at the air border of Lungi International Airport and ended on 17 May. IOM, supported by a new project donor – the United States Agency for International Development (USAID) Office for Foreign Disaster Assistance (OFDA) – is scaling up operations to include land borders with Guinea in Kambia and Bombali districts and seaports in Freetown while continuing airport activities. IOM is supporting the health screening process through dedicated health screening equipment resupply and management, Infection Prevention and Control (IPC) and health screening training, evaluation of the screening process through the US CDC Scorecard and traveler data collection and management. HHBM Project Manager Ben Potter said, “Prior to recent IOM involvement, the health screening process on the Kambia border was somewhat haphazard and inconsistent with travelers displaying a tendency to avoid health screening due to a lack of both human resources and physical infrastructure.” He added, “IOM’s deployment of newly recruited monitors, trained by senior monitors based at Lungi International Airport, has had an immediate impact on the health screening process in ensuring that all travelers conduct hand washing, and are sufficiently health-screened and sensitized on EVD.” “Training is a major part of the HHBM project and a good way to build capacity on the ground,” said Yayah Yansaneh, IOM Monitor at Lungi Airport. As part of Phase II and in partnership with the US Centers for Disease Control and Prevention (CDC), the Sierra Leone Ministry of Health and Sanitation (MoHS), the District Ebola Response Centre (DERC), the Mano River Union (MRU) and World Health Organization (WHO), IOM will support the deployment of Republic of Sierra Leone Armed Forces (RSLAF) and 80 Passenger Welfare Organisation (PAWEL) health screeners to operate health screening checkpoints at various Kambia Category B (semi-permanent staff presence, no permanent infrastructure, official) and C (unmanned, no infrastructure, unofficial) border crossing points. This will ensure monitoring of over 20 formal and 100 informal checkpoints in Kambia, Bombali and Freetown. Additionally, in Port Loko, IOM will support the deployment of RSLAF and 70 District Health Management Team (DHMT) health screeners to operate main transit route checkpoints. RSLAF’s training and deployment in Kambia and Port Loko is part of a three-month grant from the UK Department for International Development which builds upon and reinforces HHBM Phase II activities. Over the past week, visiting technical experts from IOM Mali and IOM HQ conducted extensive training of local staff to establish the Flow Monitoring Point (FMP) system in order to capture vital traveler data on such categories as point of origin/destination, gender, age and contact information. “The HHBM project will deploy six roving 7-monitor teams to provide comprehensive monitoring coverage of these health-screening points during operational hours. Roving IOM monitoring teams will ensure that the health screening process is fully operational in all types of weather and that 100 per cent of travelers, regardless of social status, conduct health screening formalities and stay safe while traveling during the rainy season,” said Jon Baker, the Emergency Coordinator. IOM is also currently exploring options to waterproof health screening points both in Port Loko and at border points along the Sierra Leone/Guinea international border to ensure both health screening teams and travelers exposure to the elements is limited throughout the rainy season. To meet the demands of covering such a vast geographical area, HHBM Phase II is presently recruiting a total of 187 staff to be deployed over five locations – Kambia, Bombali, Port Loko, Lungi International Airport and Freetown seaports to cover air, land and sea borders, as well as major internal transit routes. A new sub-office has been opened in Kambia to support IOM efforts on the ground. *Source IOM/APO]]>