Kigali (AFP) – The list of supporters is long: more than two-fifths of Rwanda’s voters have signed a petition calling for constitutional reform to allow strongman Paul Kagame a third term in power.

The authorities speak of a popular mass movement, critics of a manipulation of power. 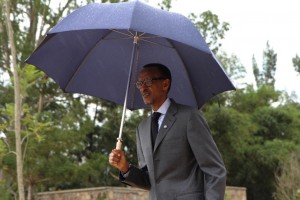 As the second and final seven-year mandate of Rwanda’s president draws to a close, there are increasing indications he may join other African leaders in changing the rules to stay put in elections due in 2017.

Kagame is a “gift from God,” said Aimable Ngendahayo, one of the 2.5 million people who have signed the petition calling for a change of Article 101 of the constitution, which limits the president to two terms.

Kagame, 57, has been at the top of Rwandan politics since 1994, when an offensive by his ethnic Tutsi rebel force, the Rwandan Patriotic Front (RPF), put an end to a genocide by Hutu extremists that left an estimated 800,000 mostly Tutsis dead.

As minister of defence and then vice president, Kagame was widely seen as the power behind the throne even before he took the presidency in 2003, winning 95 percent of the vote. He was re-elected in 2010 with a similarly resounding mandate.

From the trauma of genocide, he has been painted as a guarantor of stability and economic development, earning praise from donors — and his supporters say many in Rwanda view the prospect of his departure as a step into the unknown.

Kagame says the decision is for the “Rwandan people”.

“I have not asked anyone to change the constitution and I have not told anybody how or what to think about 2017,” Kagame said in April.

Weeks of political unrest in neighbouring Burundi began in April when President Pierre Nkurunziza announced his bid to stand for a third term in polls next month, a move branded by opponents as unconstitutional and a violation of a 2006 peace deal that ended 13 years of civil war.

Since late April in Rwanda, crowds of Kagame fans have signed the petition asking parliament to amend the constitution to “convince” their president to stand again.

“Kagame is a special man,” Ngendahayo said. “This is not the time to let him go,” said the 35-year old businessman. “Kagame loves his people, so if we the people ask him, he will accept.”

Kagame himself has said he is “open to going or not going depending on the interest and future” of Rwanda.

Rwanda watchers however question the spontaneity of the petition, in a country where the political debate is tightly controlled.

Unlike Burkina Faso’s former president Blaise Compaore, who was chased out last year after he tried to stay for a third term, Kagame can be confident of few headaches in a country with no real opposition.

Yet Washington, once among Kagame’s closest supporters, has spoken against the third term, saying it supports “a new leader” in 2017 and saying democracy requires “strong institutions, not strong men”.

Several people said they were encouraged into signing the petition.

One person, who declined to be named, said the local neighbourhood security chief, “told me it was a paper to sign”.

Without the door-to-door campaign the person would not have signed.

“Of course I signed… I am known in the neighbourhood… I do not know what might have happened (otherwise),” the person added.

One Rwandan journalist, who also requested anonymity, said that “there are people who sign in good faith, but many also who do so for fear of being labelled as enemies of the state,” while others who are illiterate in rural areas sign without even knowing what it is.

Rwandan media has reported that prisoners in one jail, Rubavu in western Rwanda, where many are serving long sentences for their role in the genocide, had also signed the petition.

The government denies any pressure has been applied. 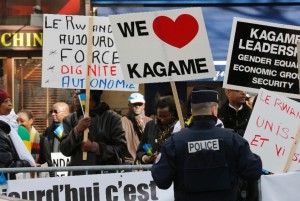 Supporters of Rwandan President Paul Kagame gather during a rally near the offices of UNESCO in Paris on February 27, 2015, where the president was attending a meeting (AFP Photo/Francois Guillot)[/caption]

Ministry of Local Government spokesman Ladislas Ngendahimana said he “categorically denies that people have signed petitions under the instigation of the government”, adding that all door-to-door canvassing was banned so as not to “influence” the people.

“The RPF never gave any instructions to local officials” to collect signatures, he said, adding that all who signed “did so of their own will… we do not need to force them.”