Kinshasa (AFP) – Outspoken reggae artist Tiken Jah Fakoly, who comes from Ivory Coast, was turned away at Kinshasa airport from entering Democratic Republic of Congo, where he was due to perform, officials said Saturday. 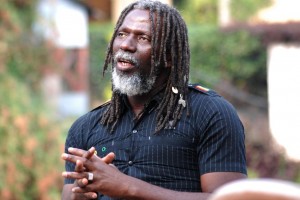 The authorities on Friday evening forbade the singer and several of his musicians from entering Kinshasa after they flew in from Brussels, because they did not appear to have valid visas, an airport official said.

The interior ministry’s media office confirmed Tiken Jah Fakoly had been turned away, but declined to make any further comment.

But a cultural events organiser and a diplomatic source said it has been extremely hard to fly artists in to DR Congo since March 15.

On that day, three members of the Senegalese rap group Y’en a Marre (We’ve had enough) and a civil society activist from Burkina Faso were among 30 people detained while attending a workshop in Kinshasa that aimed to help youngsters to get involved in democratic citizenship.

The rappers and the activist were expelled from the country on March 18, with the authorities accusing them of travelling to DR Congo to engage in a “campaign to destabilise” the country.

Most of the other detainees have since been released, but two Congolese activists remain in custody.

With presidential and parliamentary elections due in November 2016, tensions are soaring in DR Congo.

While the constitution forbids President Joseph Kabila from running for a new term, the opposition suspects the head of state may try to hold on to power.

In vain, dissidents have urged Kabila to publicly announce he will not run for president again. [caption id="attachment_18806" align="alignright" width="300"] 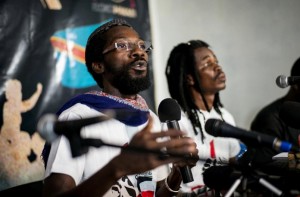 Fadel Barro (L), one of the leaders of Le Y’en a Marre, speaks at a press conference in Kinshasa in March. Three members of the Senegalese rap group were among 30 people detained while at a workshop in Kinshasa (AFP Photo/Federico Scoppa)[/caption]

Tiken Jah Fakoly, who sings in French and has long campaigned for justice and human rights in Africa, had been due to take part in the Jazz Kif festival in Kinshasa, with a live show on Sunday evening.

In February, he sang in Goma in eastern DR Congo, shattered by years of intense violence and massive human rights abuses against the civilian population.

Tiken Jah Fakoly, whose main influence is reggae icon Bob Marley, called in Goma on African leaders not to hold on to power, but rather to give way to a democratic handover of power.

Otherwise, he warned, they would be faced with the rage of a “conscious” youth movement, as did Burkina Faso’s Blaise Compaore, who was deposed in October last year after mass rallies opposing his bid to stay in power.

One of Tiken Jah Fakoly’s best-known tracks is “Africain a Paris”, a remake of Sting’s “Englishman in New York”, in which he sings about the difficulties faced by undocumented migrants in Europe.