Cape Town (AFP) – There are “no free rides” ahead for Africa as it seeks to maintain strong growth in the face of fierce global competition, business leaders told the regional World Economic Forum on Thursday. 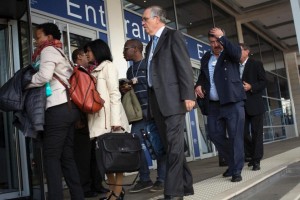 Delegates arrive for the start of the second day of the World Economic Forum meeting on Africa in Cape Town on June 4, 2015 (AFP Photo/Rodger Bosch)[/caption] Beneath the familiar tone of the “Africa rising” theme, delegates to the “African Davos” in Cape Town sounded a warning of challenges ahead for a continent whose growth has outstripped global GDP by nearly three percentage points over the past 15 years.

In a world experiencing lower growth, “every part of the globe is going to have to compete aggressively and vigorously if it is going to stake its place in the global economy,” said Antony Jenkins, Barclays group chief executive and co-chair of the conference.

“There are no free rides anymore. Africa has benefited of course from the growth in particular in Asia and the commodity-based economies, but it is going to have to work hard going forward.”

While most speakers at the conference said they remained optimistic about Africa’s future, concerns focused on falling commodity prices, power shortages, political instability and corruption.

The conference, an offshoot of the annual star-studded WEF meeting in the Swiss ski resort of Davos, has brought together a record number of more than 1,250 delegates from government and business for its 25th anniversary.

But even under the African sunshine, a little of the chill from Davos appeared to creep into presentations.

Jenkins’ warning was borne out by WEF’s biennial African Competitiveness Report, published Thursday, which said Africa’s prospects for long-term growth are under threat from weakness in the core conditions for competitive and productive economies.

“Sustainable growth must be built on a solid foundation, and this means strong institutions, good infrastructure and targeted investments in health, education and skills,” said Caroline Galvan, WEF economist and co-author of the report.

Poor performances in these basic drivers of competitivenesses were partly responsible for data pointing to low and stagnating productivity across the agriculture, manufacturing and services sectors, the report says.

It also points out that the benefits of more than a decade of consistently high growth rates have not yet trickled down to significant parts of the population, with nearly one out of two Africans still living in extreme poverty.

– Wary investors – South African mining magnate and fellow co-chair Patrice Motsepe, executive chairman of African Rainbow Minerals, said it was “critically important” that Africa recognises the need to remain globally competitive in attracting investment. “Sometimes we see good things and it’s almost like we have a right to expect the African economy will continue to do well. That is not correct.” [caption id="attachment_18553" align="alignright" width="300"] 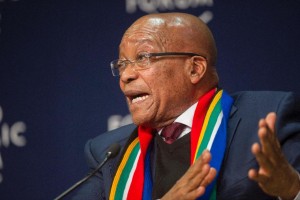 South African President Jacob Zuma addresses the opening plenary session on the second day of the World Economic Forum meeting on Africa entitled “Then and now : Reimagining Africa’s Future” in Cape Town on June 4, 2015 (AFP Photo/Rodger Bosch)[/caption] With South African President Jacob Zuma and government contingents from around the continent attending the conference, Motsepe noted: “It’s not what the politicians say about investment in Africa, it’s what the investors say — they make the decisions.” Zuma regularly says South Africa has “a good story to tell,” but the continent’s most sophisticated economy has not matched its neighbours, facing predicted growth of just two percent this year. An “Africa attractiveness” survey by accounting firm Ernst and Young found that investor perceptions of Africa have reached their lowest level since 2011, with just 53 percent of respondents saying it had improved, down from 60 percent in 2014.

“Political risk factors, such as instability and corruption, remain the main barriers that discourage investment in Africa,” the survey found.

Despite the challenges, Africa’s overall economy is expected to expand by 4.5 percent this year, according to a report last week by the Organisation for Economic Co-operation and Development, the African Development Bank and the UN Development Programme.