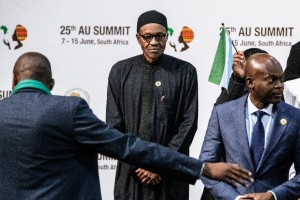 Buhari met his counterparts from Niger, Chad and Benin at a summit in Abuja last week but Cameroon’s leader Paul Biya was noticeably absent and represented by his defence minister.

The two countries have long had strained ties, in part over a bitter territorial dispute but also after Boko Haram mounted cross-border raids into northeast Nigeria from Cameroon’s far north.

Buhari visited Niger and Chad in his first week in office and said he would have gone to Cameroon’s capital Yaounde for talks with Biya had he not been invited to attend the G7 summit in Germany.

“But on my return to Nigeria now, I will try to go to Cameroon,” he said on the sidelines of the African Union summit in Johannesburg.

The current force came into being after Chad’s President Idriss Deby sent troops to assist their Cameroonian counterparts against a wave of attacks by the Islamist militants.

Troops from Niger and Chad have crossed into Nigerian territory but those from Cameroon have not, in an indication of the strained relations between the neighbours.

But Buhari indicated last Thursday that soldiers from the new Multi-National Joint Task Force (MNJTF) would not be restricted in terms of movement.

The MNJTF will be headed by a Nigerian officer for the duration of the mission, with his deputy from Cameroon for an initial 12 months once troops are deployed from July 30.

Buhari has made crushing Boko Haram his immediate priority since coming to power on May 29 and he told AFP that foreign support was vital. 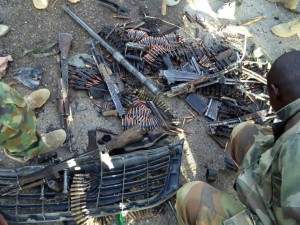 Nigerian soldiers show arms and ammunition recovered from Boko Haram Islamists during military operations in Dikwa on May 23, 2015 (AFP Photo/[/caption]

In the interview, Buhari also addressed concerns he had not yet appointed a cabinet more than two weeks after he came to power following his victory in March polls.

“I don’t know why people are so anxious to have ministers, but eventually we will have,” he said.

Buhari said that audits were currently being carried out in various government departments — and the finance and petroleum ministries in particular — to try and establish what situation they were left in by the previous administration.

“I am not in a hurry to get ministers,” he said.

“I want to get ministers after at least I have seen this report, so that I don’t have to appoint a minister today and sack him next week.”