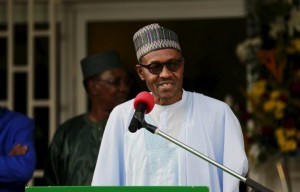 Nigeria’s President Muhammadu Buhari speaks during a news conference after the Summit of Heads of State and Government of The Lake Chad Basin Commission in Abuja, Nigeria, on June 11, 2015. Reuters/Afolabi Sotunde[/caption] Nigerian President Muhammadu Buhari has ordered the immediate release of $21 million (4.2 billion naira) to the coalition forces fighting Boko Haram. Buhari said Sunday the large sum of money will be released within a week to the Multinational Joint Task Force, which comprises troops from Nigeria, Chad, Niger and Cameroon, according to local media reports. Nigeria had pledged a total of $100 million (19.9 billion naira) to fight the militant group. Boko Haram’s Islamist insurgency has plagued northern Nigeria for the past six years. More than 15,000 people have died, and nearly 1.5 million others have been displaced in Nigeria since 2009. Buhari said it’s time to put an end to Boko Haram and other regional crises within the next five years, Nigerian newspaperPremium Times reported. “Our continent is inundated with conflicts of diverse forms. They include the crisis in Burkina Faso, Mali, Libya, Central African Republic, South Sudan and more recently in Burundi,” Buhari said while chairing the Peace Security Council meeting at the ongoing 25th African Union summit in Johannesburg. “As you are aware in 2013 during our 50th anniversary celebration of our union, we as African leaders committed ourselves to the objective of silencing the local guns in Africa by 2020.” The Nigerian president, who was inaugurated last month, also called on fellow African leaders at the summit to stop “bickering among themselves” and put the interest of their countries and people above their own. Buhari lamented the fighting in South Sudan, a young nation that plunged into crisis in 2013, when President Salva Kiir sacked his deputy Riek Machar, as well as the situation in Burundi, where unrest and instability erupted amid President Pierre Nkurunziza’s push for re-election. “We must change the face of Africa, we must give hope to the hopeless,” Buhari said Sunday. “The time to do so is now as we look forward to the much awaited 2020 to deliver a continent that is at peace with itself, prosperous, a global partner and a democratic showcase.” *Source IBT]]>