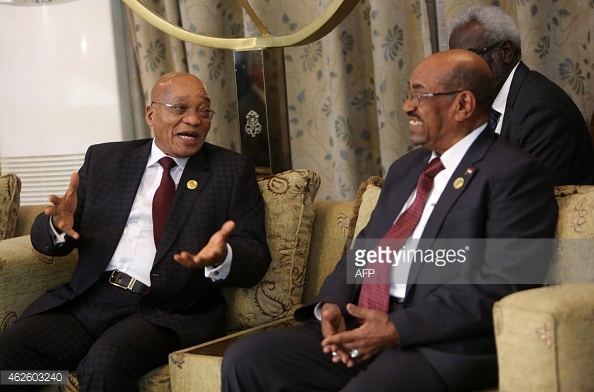 JOHANNESBURG (Reuters) – From the moment Omar al-Bashir touched down in South Africa, Pretoria had a choice: arrest the Sudanese president for alleged war crimes and face fury from the rest of the continent, or grant him safe passage home and take flak from the West.

The decision, confirmed by the departure of Bashir’s plane into the skies above the capital on Monday, spoke volumes about South Africa’s priorities – Africa comes first, and legal niceties such as the authority of domestic courts or international statutes a distant second.

It was a dramatic volte face from 2009 when, shortly after Bashir’s indictment by the International Criminal Court (ICC) for war crimes and crimes against humanity in Darfur, his South African counterpart Jacob Zuma made clear he was not welcome.

Appearing on CNN, Zuma was asked if he would order Bashir’s arrest should he “ever set foot inside your country?”

“That is correct,” he replied, confirming lingering remnants of the idealism that underpinned South Africa’s relations with the outside world in the early days of the ‘Rainbow Nation’ under Nelson Mandela.

Six years later, the Bashir episode has highlighted two dominant themes under Zuma: a nation with a split European-African personality for the last three centuries now sees its destiny firmly in Africa; and, with growing South African trade and investment in the rest of the continent, the idealism is dead.

“The moral foreign policy has all but gone,” one Western diplomat in Pretoria told Reuters. “The other thing apparent from the current administration is a very clear prioritization of stability over values.”

Compounding the anger among diplomats and rights groups is the flouting of a court order that made it explicitly clear Bashir should not be allowed to leave until a judge had decided whether or not he should be arrested.

The Southern African Litigation Centre, which brought the case, argued that as an ICC signatory South Africa had an obligation to arrest Bashir in spite of the ad hoc diplomatic immunity cast over the African Union summit in Johannesburg.

In Geneva, U.N. Secretary-General Ban Ki-moon told reporters he was taking the issue of Bashir’s arrest warrant “extremely seriously”, and demanded the authority of the ICC be respected.

Yet hours after Khartoum confirmed Bashir was on his way home, the government had made no formal statement about the imbroglio. Justice minister Michael Masutha told Reuters he would “prefer not to discuss it”.

Instead, the only line from those in charge of Africa’s most advanced economy was a statement from the African National Congress (ANC) that sided firmly with the AU: no sitting president should be prosecuted, the most recent example being Kenya’s Uhuru Kenyatta.

He was accused of provoking ethnic violence after Kenya’s 2007 election. Charges were dropped in March after what prosecutors said was political interference and tampering with witnesses.

Dismissing the court as “no longer useful”, the ANC painted Bashir as the latest in a long line of Africans to suffer agenda-driven prosecution and took a veiled swipe at the United States, which is not a full ICC member.

For many, the valid concerns about selective ICC justice were irrelevant, and marked another low for a country that last month was accused by the United States of paying a $10 million bribe to secure the 2010 soccer World Cup.

“Debates over the merits of the ICC and even the possibility of withdrawing from the treaty are options – but they do not alter South Africa’s current obligations,” NKC African Economists said.

“Our fading human rights record and waning respect for the rule of law have been highlighted once again.”

Ironically for South Africa, still trying to patch up relations with its neighbors after a wave of attacks on African migrants, it could yet backfire as a regional public relations exercise.

While backing a Western pariah such as Bashir may win plaudits from the likes of Zimbabwe’s Robert Mugabe, allowing one man’s presence to overshadow a two-day summit of 54 nations will have irked most African diplomats.

The meat of the AU meeting – from women’s rights to the threat posed by Boko Haram to Burundi’s political crisis – was subsumed in the flurry of interest in whether Bashir was in the building and whether or not he was in handcuffs.

“Ultimately, it shows a failure of South Africa’s diplomacy,” said Liesl Louw-Vaudran of the Pretoria-based Institute for Security Studies.

“They clearly knew this was coming and tried to avert it, but having been faced with the Bashir situation, they made the pro-Africa choice – and the anti-international community choice.”