Accra (AFP) – Ghana has suspended a trial for an Ebola vaccine after complaints that locals were being needlessly used as “guinea pigs” in a country currently free of the deadly disease.

The West African nation had agreed to join other countries in hosting trials to test the safety and effects of two experimental vaccines against a virus that has killed more than 11,150 people, mainly in Guinea, Liberia and Sierra Leone. 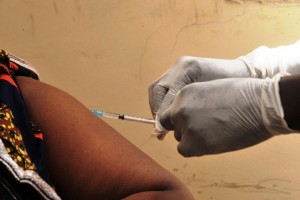 It had started Phase 1 safety tests on one vaccine developed by US pharmaceutical giant Johnson and Johnson and Denmark’s Bavarian Nordic in the southeastern Volta region, giving volunteers a mobile phone and 20 cedis ($4.7, 4.2 euros) each.

But faced with mounting opposition to the trial, Health Minister Alex Segbefia, who is currently out of the country, decided to suspend the tests, his spokesman Tony Goodman told Citi FM radio.

“The minister has got a lot of calls from numerous Ghanaians saying that they are not interested in any trial,” he said Wednesday.

“So he said… the trial should be suspended until he returns to look at the issues.”

Leaders of the ruling National Democratic Congress in the Volta region said the trial was a “needless experiment”.

“We have cases of malaria, cholera and HIV/AIDS among others. We need vaccines or remedies for these diseases,” they said in a statement.

“Why should a country that is not threatened by Ebola risk the lives of its citizens for an unnecessary experiment?

“We would be grateful if the experiment is cancelled completely to prevent the use of innocent Voltarians as guinea pigs.”

There is no licensed treatment or vaccine for Ebola and the World Health Organization has endorsed rushing potential ones through trials to try to halt the epidemic.

So far, two vaccines that are in their most advanced stages of development appear to be safe, the US National Institute of Allergy and Infectious Diseases said in March.

The Ghanaian Food and Drugs Authority (FDA) has said the vaccines cannot trigger an outbreak of the deadly haemorrhagic fever.

In a statement on its website, the FDA pointed out that Ghana is very close to epidemic areas in West Africa that are still not rid of the virus.

“Participation in the trials will give crucial information about whether the tested vaccines are safe, well tolerated and capable of stimulating adequate immune responses in people living in Ghana.”

The Ebola outbreak that flared up in December 2013 is the worst since the deadly virus was first discovered in 1976.