Lawrence Delevingne* Blackstone Group has strengthened its ties to Nigeria, the West African country where it could put big money to work. [caption id="attachment_18642" align="alignleft" width="300"] 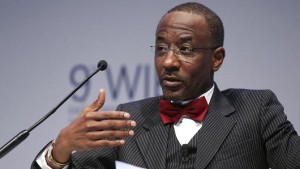 Chris Ratcliffe | Bloomberg | Getty Images
Lamido Sanusi, former governor of Nigeria’s central bank.[/caption] The private equity giant announced Thursday that its Black Rhino unit had appointed Lamido Sanusi as chairman of its board of directors. Sanusi is emir of Nigeria’s northern Kano state, a traditional leader who still wields considerable influence, and the former governor of the country’s central bank. The appointment comes after $310 billion Blackstone announced in August 2014 that it had partnered with Dangote Industries—led by Nigerian billionaire Aliko Dangote—to invest jointly up to $5 billion over the next five years in energy infrastructure projects across Sub-Saharan Africa, part of President Barack Obama’s Power Africa initiative to match private capital with continental energy needs. No projects for the joint venture have been announced, but Blackstoneis considering an investment alongside Dangote to construct pipelines to bring gas from the country’s energy-rich southern delta region to its business center, Lagos, according to a person familiar with the situation and comments previously made by Dangote. Dangote said he plans to invest up to $2.5 billion in the pipes, which would potentially quadruple the supply of gas to the country. A spokesman for Blackstone declined to comment on the pipelines.

Some of the most powerful men in Nigeria now hail from the country’s mostly Muslim northern states. Sanusi remains the traditional leader of Kano, also the birthplace of Dangote. (The wealthiest man in Africa, Dangote made a pilgrimage to pay his respects to Sanusi when he became emir in 2014.) New President Muhammadu Buhari hails from Katsina, a nearby northern city.
“Emir Sanusi has a comprehensive mastery of the interdependence of Africa with the global economy,” Mimi Alemayehou, chair of Blackstone African Infrastructure and managing director at Black Rhino, said in a statement. “He has the courage and integrity necessary to give us the full, candid and impartial counsel that a long-term investor in Africa needs. We are gratified and, indeed, privileged to have a partner of such immense stature alongside us as we chart our course.” Black Rhino’s only announced project so far is a $1.4 billion oil pipeline from sea ports in Djibouti to Ethiopia, a landlocked country that now relies on trucks to bring in fuel. *Source CNBC
]]>