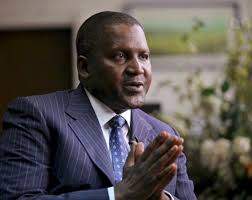 Aliko Dangote[/caption] Dangote Cement, the cement producer controlled by Aliko Dangote, Africa’s richest man, has commissioned a $500 million cement plant in Ethiopia. The cement plant which has an installed capacity of 2.5 million metric tonnes per annum (mmtpa) was inaugurated on Thursday at a ceremony in Addis Ababa that was attended by several Nigerian business leaders and government officials from Ethiopia led by the Ethiopia Prime Minister Haile Mariam Desalegne. The plant is located in Mugher, an industrial hub in Ethiopia’s western district, about 80 kilometers from Addis Ababa. Aliko Dangote told guests during the event that his company is looking to build more cement plants across Africa to actualize its ambition of reaching an annual production of 62 million tonnes by 2017. The company currently produces more than 40 million tonnes annually. The Ethiopian plant will initially produce 2.5 million metric tonnes a year to keep up with Ethiopia’s market, as a construction boom in the country has led to a shortage of cement. But Dangote told guests his company plans to double its production in the near future. The plant will produce 42.5 cement grade and will create about 7,000 jobs.

Apart from its plants in Nigeria, Dangote Cement has factories in South Africa, Senegal, Zambia and Tanzania. It is currently building a $400 million factory in Kenya.

Aliko Dangote is Africa’s richest man with a fortune estimated at $17.8 billion according to FORBES.