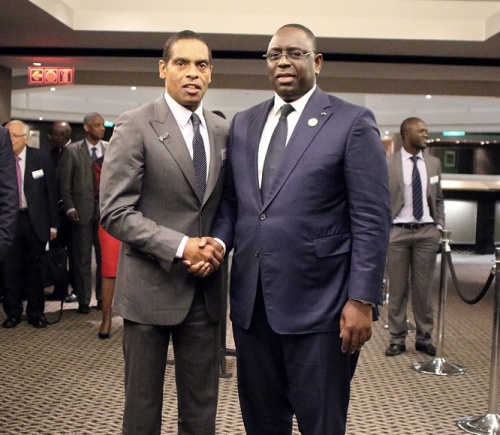 Dr Álvaro Sobrinho and HE Macky Sall, President of the Republic of Senegal[/caption] A ‘Regional Scholarship and Innovation Fund’ for Africa was launched on 13th June 2015. The launch event was led by the President of the Republic of Senegal HE Macky Sall, and representatives of the Heads of States of Ethiopia and Rwanda.  The Fund will contribute to the World Bank ‘Partnership for Skills in Applied Sciences, Engineering and Technology (PASET)’ programme, which seeks to award 10,000 African PhD scholarships over ten years, to strengthen research and innovation in applied science, engineering and technology. The African Governments involved committed to the Fund alongside a new group of prominent business figures, the ‘Africa Business Champions for Science’, to raise a total of $5million during the launch. The ‘Africa Business Champions for Science’ group is chaired by the Angolan businessman Dr Álvaro Sobrinho, also Chairman of the Planet Earth Institute NGO . Additional funds will now be mobilised from African Governments, business leaders and other developmental partners, to operationalise the Fund by June 2016. The initiative is led by the PASET Steering Committee comprising Ministers responsible for higher education and research from Senegal, Rwanda and Ethiopia, business leaders, representatives from academia and the World Bank. The overall objective of PASET is to accelerate the creation of a skilled, high-quality workforce in Africa to power Africa’s socio-economic transformation. The launch of the Fund is an outcome of the actions agreed at the previous PASET Forum’s held in Ethiopia (2013) and Senegal (2014), as well as the related Forum on Higher Education, Science and Technology held in Rwanda (2014). HE Macky Sall, President of the Republic of Senegal, hosted the event in Johannesburg, South Africa, in the company of: Shiferaw Shigutie, Minister of Education, representing HE Prime Minister Desalegn of the Federal Democratic Republic of Ethiopia; Louise Mushikiwabo, Minister of Foreign Affairs and Cooperation, representing HE President Kagame of the Republic of Rwanda; Dr Álvaro Sobrinho, representing the African Business Champions for Science group; and Prof Mary Teuw Niane, Minister of Higher Education & Research of Republic, Senegal and Chairman of the PASET Steering Committee. The Heads of State of these three Governments will now sign a formal declaration.

The World Bank reaffirmed its support to the PASET objectives and its readiness to continue to support the initiative. According to the World Bank, after a decade of exceptional growth in Africa, averaging 4.5 percent a year across the continent, it is necessary to build skills to sustain this growth and transform African economies towards higher levels of competitiveness. Currently the African workforce greatly suffers from a lack of scientific and technical capacity and an integrated approach that brings together all partners – public and private, traditional and emerging partners – is needed. The Regional Scholarship and Innovation Fund adopts this approach, with African Governments committing hand in hand with the private sector and other partners. His Excellency Macky Sall, President of the Republic of Senegal: “Increasingly, Africa sees the need to depend on science and technology to increase industrial and agricultural productivity, guarantee food security, tackle diseases, ensure a safe water supply, and reduce the energy deficit. While these may seem like insurmountable challenges, the continent cannot waste any more time. We must launch a sustained campaign to train and employ a great number of scientists, engineers, and technicians to achieve the structural transformation that Africa needs, and that is exactly what this programme is designed to help support.” Dr Álvaro Sobrinho, Chairman, African Business Champions for Science and Chairman, Planet Earth Institute: “As Africa continues to make great strides forward, we must also continue to recognise the importance of investing in our future generations. This investment must go beyond access and enrolment to develop excellence, too, especially in science and technology. Excellence in science and technology will equip Africa with a workforce ready to compete in the 21st century, where we can lead the world as scientists, engineers and innovators. As Chairman of the African Business Champions for Science, I confirm by commitment to this agenda and to recruiting others that share the vision. Led by the African Governments and in partnership with business leaders and the World Bank, we want to go beyond philanthropy to find innovative ways to properly link industry with scientific and technical excellence for the long-term, and for the benefit of us all” *APO/PEI]]>