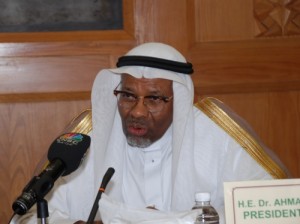 Dr. Ahmed Mohamed Ali, President of the Islamic Development Bank (IDB)[/caption] Dr Ahmad Mohamed Ali, President of the Islamic Development Bank Group , has stated that preparations are in full swing at the IDB Group for its annual meeting, which is scheduled to take place this year, Allah willing, in Maputo, Republic of Mozambique at the kind invitation of the Government of Mozambique. This is the first time the meeting of the IDB Board of Governors is taking place in the southernmost part of Africa, to which the IDB gives priority in its development programs and plans. The meeting has taken place several times in the past in a number of member countries in the west, east and north of the continent thereby indicating the IDB’s firm commitment to supporting developmental efforts on the continent. In his statement, Dr. Ahmad Mohamed Ali  indicated that the meeting, which starts on Wednesday 23Sha’aban 1436H (10July 2015), would take place under the patronage of His Excellency Filipe Nyusi, President of the Republic of Mozambique and would be attended by ministers and senior officials of the Government of Mozambique as well as by the Ministers of Finance and Economic Affairs of  the 56 IDB  member countries. The meeting and its side events will also be attended by a large number of representatives of the public and private sectors in member countries, international and regional financing institutions, Islamic banks, the federations of contractors and consultants as well as national development banks and funds in Muslim countries. The meeting of the Board of Governors will consider a number of important items and reports on its agenda such as a report on the Ten-Year Strategic Framework of the IDB Group, which was approved by the Board of Governors last year in Jeddah with a view to helping the IDB Group react more effectively to social and economic developments in its member countries. The agenda also comprises items on the consideration of the 40th Annual Report of the IDB and the approval of the IDB annual audited accounts, programmes and specialised funds. In addition to the 40th Annual Meeting of the IDB Board of Governors, the annual meetings of the members of the IDB Group will also take place. They are the Islamic Corporation for the Insurance of Investment and Export Credit (ICIEC), the Islamic Corporation for the Development of the Private Sector (ICD), the International Islamic Trade Finance Corporation (ITFC) and the Islamic Solidarity Fund for Development (ISFD). The President of the IDB Group further stated that this year the meeting would coincide with the ICD’s 15th anniversary, whose General Assembly is expected to consider a proposal to double its authorised capital and its capital open for subscription. Since its inception, the ICD’s authorised capital has been USD 2 billion and the capital open for subscription USD 1 billion. Among the side events of the Annual Meeting are symposia for the discussion of issues of  developmental significance to IDB member countries such as “Lessons Learned from the Ebola Outbreak in West Africa”, “The Role of the Coordination Group and Regional  Development Institutions in Developing the African Continent”, “The Role of Trade in Strengthening Economic Cooperation and Regional Integration among IDB Member Countries”, “Knowledge Management  in Multilateral Development Banks”, “The Role of Islamic Finance in Promoting Prosperity and Inclusive Development” and “Enhancing the Construction Industry in IDB Member Countries”. Also taking place is the 10th Global Islamic Finance Forum entitled “Exploring Innovative Solutions for Affordable Microfinance in Africa”.

It is worth indicating that the Republic of Mozambique became a member country of the IDB in November 1995 and has ever since maintained good ties of cooperation with the IDB Group. The overall amount approved to date by the IDB Group for projects in Mozambique stands at  approximately USD 208 billion including contribution to a number of key development sectors such as agriculture, education, energy, health and roads. Financing is also extended to external trade operations as part of the IDB Group’s efforts to promote trade among its member countries. After the closing session of the Annual Meeting of the Board of Governors, a number of financing agreements will be signed, followed by a joint press conference by H.E. the Minister of Economic Affairs and Finance IDB Governor for the Republic of Mozambique and H.E. the President of IDB Group. *APO]]>