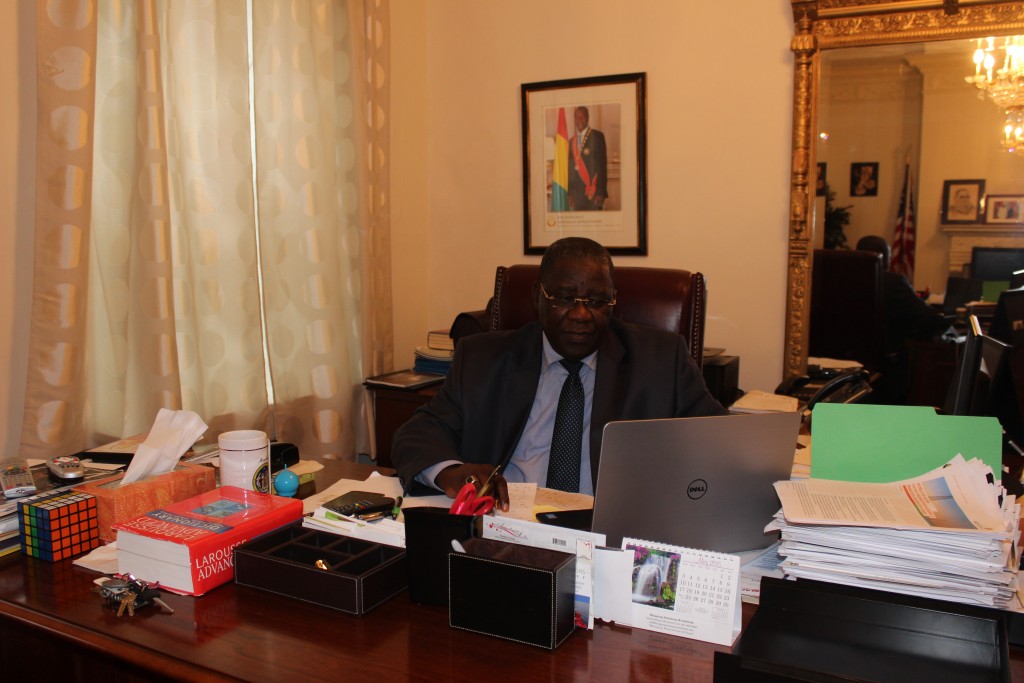 Guinea is on back on the rails says Ambassador Mamady Conde[/caption] He may not have been in Washington for many years, but Guinea’s Ambassador Mamady Conde certainly stands out as one of the most dynamic and media friendly envoys from Africa. He responds at short notice to media enquiries and is totally at ease talking off the cuff about his country, Guinea, which is digging its way out from unfortunate political developments like a military coup and the outbreak of Ebola last year. When Pan African Visions expressed interest in doing an interview with Ambassador, he not only accepted without qualms but also indicated that with him, there were no taboo topics. On the recent visit of President Conde to the USA, Ambassador Conde described it as very fruitful. In Washington to discuss Ebola response in the Mano River Countries, President Conde was also received at the White House by President Obama alongside Liberian President Sirleaf Johnson and Sierra Leonean leader Ernest Bah Koroma. President Conde also met with numerous U.S Law Makers from both chambers of the US Congress and was guest of honor at the monthly get together of the Congressional Black Caucus. The President also met with personalities from the business community interested in knowing what opportunities abound in Guinea. Important discussions also took place between President Conde and authorities at the Department of Health and USAID which has been a very important ally in the fight against Ebola in Guinea. [caption id="attachment_18524" align="alignleft" width="300"] 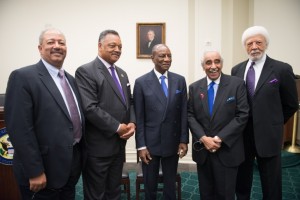 President Alpha Conde with the Rev Jesse Jackson and some members of the congressional Black Caucus. He was guest of honor at the monthly dinner of the Caucus[/caption] Guinea is has steadily turned the tables in fighting the Ebola outbreak Ambassador Conde said. The number of cases have dwindled drastically and in the months ahead the odds are very high that Guinea will be Ebola free. Besides fighting Ebola, his country has also embarked on a vast overhaul of its health care system and infrastructure. With support from friendly countries like the USA and France, and important agencies like the Centers for Disease Control-CDC, Guinea is building laboratories, and a system that will make the country better equipped to handle any future outbreaks of Ebola and other diseases. While the support from the international community has been of tremendous help, much work is still needed according to Ambassador Conde. Though huge sums of money are regularly announced for Ebola relief programs, much of the money is not handled directly by the authorities in Guinea who have a better grasp of the situation and local realities. A discrepancy does exists between the funds generated by the international community for the fight against Ebola and what has actually be given to the government of Guinea to support its efforts fight against the virus. Ebola may have receded, but rebuilding affected communities is no easy task and it is for this reason that President Conde and other Mano River Countries have been urging the international community not to relent in their support. [caption id="attachment_18525" align="alignleft" width="620"] 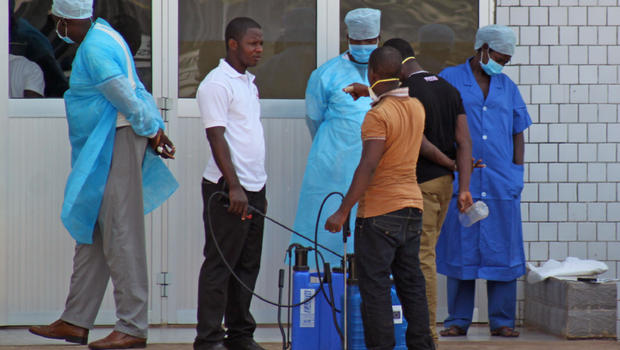 In this photo taken on Saturday, March 29, 2014, medical personnel at the emergency entrance of a hospital receive suspected Ebola virus patients in Conakry, Guinea. AP . Besides fighting Ebola, Guinea is overhauling its health care system and infrastructure[/caption] The impact of Ebola on economic development has been very significant but Guinea has weathered the storm and it is now time for economic projects that were stalled to take off again. One of such projects is Simandou, a project which provides access to one of the world’s largest reserves of Iron Ore. While the ambitious project is expected to usher in a new era of economic prosperity for Guinea, Ambassador Conde admitted that the outbreak of Ebola throw a spanner in the works of implementation. The project is expected to pick up again with the recession of Ebola. Guinea’s vast mineral resources have so far not served the development needs of its people. On his accession to power, the government of President Alpha Conde went the extra mile in fighting to cancel loop sided mining concessions that robbed Guineans blind. Simandou will be one of the first mining projects that is accompanied by a very ambitious development program accruing from it for the entire country. It will not only generate revenue and create jobs for Guineans, but also help in building the kind of transport infrastructure that links up the entire country. With the fortunes of the ambitious Simandou project tied to the mining giants Rio Tinto, which seems to be dragging its feet, Ambassador Conde was asked what will happen if Rio Tinto backs out. The government has a plan B he said. The quality of iron ore from Guinea ranks amongst the best in the world and there are many other partners who will gladly want to partner with the government of Guinea in the project should for some reasons Rio Tinto falters in its engagements. Even getting Guinea to the point where it is now has been a herculean task as the President himself said he inherited a country and not a state. President Conde toiled hard to turn around the moribund economy he found in place. The mining code was reformed and thanks to the efforts from his government, Guinea became eligible for the Highly Indebted Poor Countries Initiative. [caption id="attachment_18527" align="alignright" width="594"] 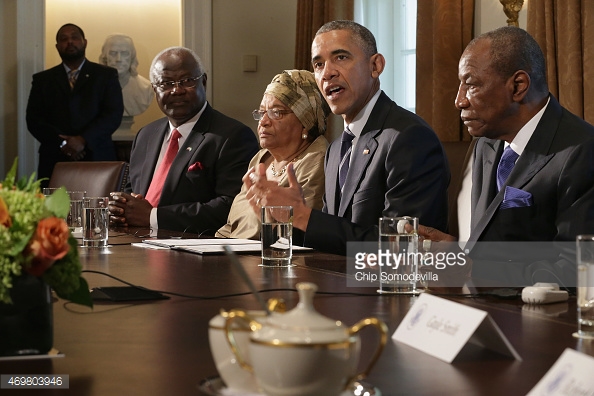 President Conde was received by US President Barack Obama to discuss Ebola relief efforts and efforts to create long term economic recovery .Pic Getty Images[/caption] As the first mandate of President Alpha Conde comes to an end, the opposition in Guinea has embarked on highly mediatized protest marches to force a change in the electoral calendar. Faulting President Conde for the electoral calendar is disingenuous said Ambassador Conde as he explains the false flags been raised by the opposition. The electoral Calendar is not drawn up by the President but by the independent electoral commission of Guinea. Local government officials whose mandate had long expired were in place when President Conde was elected in 2010. While in office, the legislative elections were organized and those leading the protests said nothing about local government elections. With the outbreak of the Ebola virus, it was impossible to hold local government elections. While the calendar indicates that the Presidential elections will take place before the local government elections, the opposition thinks it should be the reverse. Although the mandate of local governments have expired, having come thus far, that last thing that Guinea wants is a vacuum at the summit of the state reason why the option should be Presidential elections first so as to maintain stability Will President Conde seek a second term? Yes said the Ambassador who believes that if Guinea is back on the rails today, it is thanks to President Conde .The pride of Guineans has been restored and the country is in much more better shape than it was when he took over. The electricity problems in the capital city of Conakry have been resolved. The security situation in country has improved. President Conde has a solid development agenda for the country he said and it will do the country good if he is given a second mandate to complete the vast reform agenda that he started. The opposition to some of his reforms comes largely from people who cannot identify with the fact that things are changing in Guinea and certain practices which benefitted a privileged few to the detriment of the majority are been pushed aside. Those in opposition to President Conde thrived in a system of cronyism and corruption which ran Guinea to the brink. President Conde spent a life in politics fighting to make things better for Guineans and he is not sparing any effort to do that now that he has the opportunity. In the face of the protests from the opposition, President Conde has opted for dialogue. He met recently with the opposition leader to understand their demands. With the chaos that has erupted in other African countries over elections, there is hope in the Independent National Electoral Commission. Even with the Commission, the Ambassador points out differences that President Conde had with those in the opposition today over its composition and modus operandi. While President Conde wanted it to be completely made of independent personalities void of partisan affiliations, the approach finally adopted was that of those in the opposition which privileged the composition of the Commission to be made of representatives from political parties. The Commission has done well this far and there are hopes that it will continue to rise up to the challenge of organizing free and fair elections whose outcome will be accepted by all. 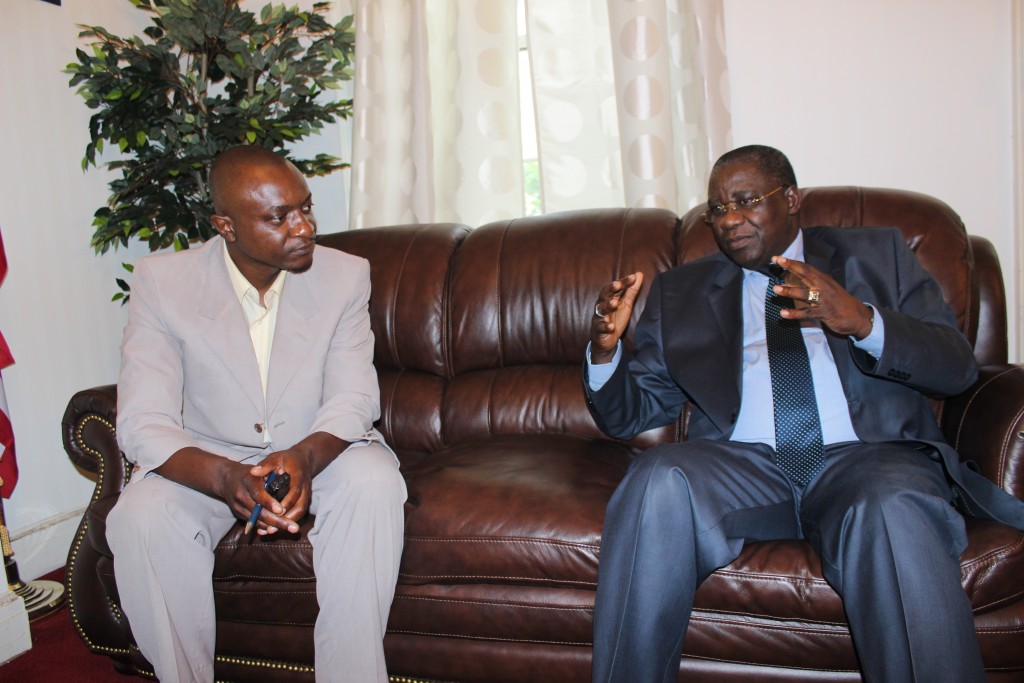 Guinea has come a long way Ambassador Conde said and there is no way it is turning back to the ways of the past. It is part of the reason the President has to use all opportunities on international outings like the one that brought him to Washington recently to present the new and emerging Guinea to the world. All Guineans want is peace, there want stability, there want economic development and progress. The Guinean Envoy lauded the strong ties between his country and the USA.President Conde has visited the US multiple times and cooperation between the two countries has steadily grown since he took office. The interview could not end without a question on the difference between the government of former President Lansana Conte where Ambassador Conde served as Minister of Communication and Foreign Affairs and that of the current Government. While the Ambassador placed service to his compatriot overall, he thinks the management styles and visions of Conte and Conde are starkly different. Coming from the military, President Conte ran the affairs of the country with that mindset. His limited education was also a factor in the way he ran Guinea and there was very little room for dissent. President Conde on the other hand was a university professor and grew up in a democracy and braved consequences in the fight for democracy. It is with this background and mindset that he has used his reform and development oriented government to put Guinea back on track.  ]]>