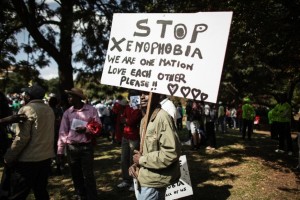 A demonstrator holds a banner in Johannesburg on April 23, 2015 during a march against xenophobia (AFP Photo/Gianluigi Guercia)[/caption] Maputo (AFP) – South African President Jacob Zuma apologised to Mozambicans Wednesday for a recent outbreak of xenophobic violence in which at least seven people died and hundreds of migrants were forced to flee their homes.

Speaking at the start of a two-day state visit to Maputo, Zuma said the attacks — which included the murder of a Mozambican man captured by a press photographer — “shocked us and disturbed us”.

Apologising on behalf of the “small minority of South Africans” involved in the violence, Zuma said: “The Mozambicans are our brothers, our sisters, that’s like a family problem really.”

Rampant unemployment and poverty are seen as contributing to the violence by South Africans, who accuse migrants from Mozambique and other neighbouring countries of stealing their jobs.

Since the end of apartheid 21 years ago, South Africa has attracted millions of migrants seeking a better life in the continent’s most advanced economy.

Zuma pledged to address “some of the underlying factors” to ensure that the attacks against foreigners did not erupt again, without elaborating.

While condemning the violence, South Africa has also cracked down in a series of raids in which 1,650 illegal immigrants have been arrested.

More than 400 Mozambicans were expelled on Friday and 427 others are slated to be deported soon.

Zuma is in Maputo at the invitation of President Filipe Nyusi, with the visit set to focus on bilateral and regional cooperation.