Harare (AFP) – Zimbabwe will import 700,000 tonnes of corn to avert hunger after annual crop yields shrunk by nearly half due to poor rains, the national television network reported Tuesday. 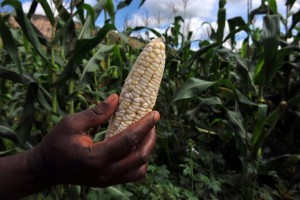 The minister said the bulk of the corn crop was written off after an erratic rain season.

It was not immediately clear where the corn will be imported from but Zimbabwe has in the past bought grain in neighbouring Zambia and South Africa.

But it is expected to add pressure on the cash-strapped government that is already struggling to pay public service workers salaries.

The UN’s Food and Agricultural Organisation (FAO) says Zimbabwe needs around 1.8 million tonnes of corn to feed its people annually.

“The unfavourable rains in Zimbabwe, particularly impacting the low-producing regions in the south resulted in a write-off of nearly 300,000 tonnes,” the FAO said in its latest report.

For years the country has suffered a food deficit which President Robert Mugabe blames on low rainfall caused by climate change.

But his critics say the low yields are a result of Mugabe’s controversial land reforms which saw the seizure of white-owned commercial farms for redistribution to landless blacks, most of whom lacked the means and skills to farm.

Mugabe earlier this year admitted that he blundered by giving ill-equipped black farmers vast tracts of farmland seized from whites under his controversial land reforms.