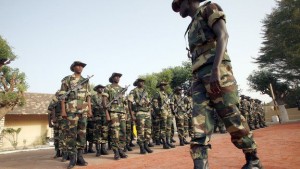 Senegalese forces are among the best trained in Africa[/caption]

The decision by Senegal to send 2,100 troops to Saudi Arabia may come as a surprise to many. However, this is not the first time that the “jambars” will set foot in the kingdom.

A much smaller contingent was sent to help “protect the holy sites” of Mecca and to honour “the historic ties between the two countries” 24 years ago.

That operation ended tragically with a plane crash that killed 92 Senegalese soldiers.

The latest deployment will join a Saudi-led coalition fighting to secure the kingdom’s border with Yemen.

Even so, Senegalese leader Macky Sall is using more or less the same reasons for taking troops to Saudi Arabia used then by former President Abdou Diouf all those years ago.

Except that this time, the rejection is much wider.

It seems that the younger generation of politicians and citizens does not buy the argument of “protecting the holy sites of Islam” being served to them.

“Why would Senegalese troops go to Yemen to fight a war that is not theirs?” is a widely shared view on social media today.

And many did not go far before making the link between President Sall’s recent announcement that Saudi Arabia would invest heavily in the government development programme known as Programme Senegal Emergent 2035 (PSE), and the decision to send troops to the kingdom.

A well-known columnist went as far as saying that “the blood of the jambars will be funding the PSE”.

Senegal, a majority Sunni Muslim country, is the only non-Arabic country to join the Saudi-led coalition.

Senegal has long been a master at maintaining good relations with a variety of different powers.

Saudi influence has increased in recent years, as seen in the number of mosques being built.

But Senegal also enjoys good relations with Shia Iran, accused of backing the Houthis in Yemen, against the Saudi-led coalition.

Both the US and former colonial power France also see Senegal as a close ally against Islamist militant groups in West Africa.

Senegal armed forces have a reputation of being among the best trained in Africa. Senegalese soldiers are currently deployed in four peacekeeping operations in the continent.

In the past, they have been deployed in Haiti and Lebanon.

But Yemen is a bloody battlefield, not a peacekeeping operation. And it is not clear whether the Senegalese public is ready to accept heavy casualties in a country as far away as Yemen.